Edite Amorim What it means to collaborate 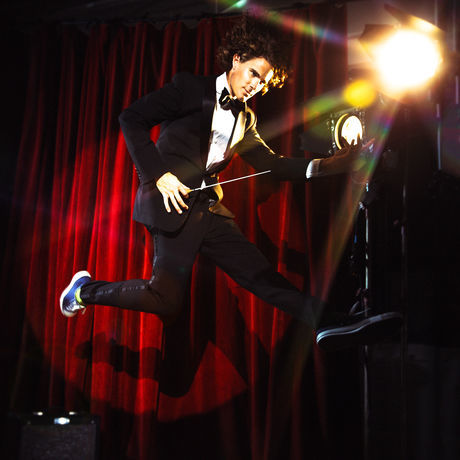 Conductor, composer, arranger, producer and songwriter Steve Hackman is increasingly in demand as one the most compelling artists contributing to a new landscape in classical music. Fluent in both classical and popular repertoire, he crafts virtuosic, cross-genre works and performances that intrigue the established audience and engage an excited new one.

Active across the country as a guest conductor of major symphony orchestras, Hackman presents programs he architects which synthesize orchestral and pop masterworks. He has performed his pieces such as Brahms V. Radiohead, Beethoven V. Coldplay, Copland V. Bon Iver and Bartok V. Björk with the Pittsburgh Symphony, Indianapolis Symphony, Alabama Symphony, Florida Orchestra, North Carolina Symphony, Charlotte Symphony, Columbus Symphony and Colorado Music Festival orchestra. Hackman’s work as an artistic entrepreneur was most recently recognized by an invitation to speak at the TedX Conference.

In 2016, Hackman continues in his second season as creative director and conductor of FUSE at the Pittsburgh Symphony Orchestra, an innovative new concert series aimed at engaging a new young audience. The season will include the premiere of Tchaikovsky V. Drake, a symphonic mash-up of the Tchaikovsky Fifth Symphony and the music of Drake, as well as Bartok V. Björk, a piece which fuses the former’s Concerto for Orchestra with the latter’s first three albums. For the final FUSE concert of 2015-16, Hackman composed Firebird: Remix | Response, an original concept-album/remix of Stravinsky’s Firebird, for full orchestra, chorus, singer, rapper, drummer, synthesizer, and electronics.

The summer of 2016 saw Hackman’s first collaboration with the Mendelssohn Choir of Pittsburgh, in a full program of his own compositions and arrangements, including mash-ups of John Mayer+Mahler, The Beatles+Mozart, and Leonard Cohen’s ‘Hallelujah’ with Randall Thompson’s ‘Alleluia’.

From 2009-2013, Hackman served as co-creative director of the Happy Hour at the Symphony Series with the Indianapolis Symphony, where, along with co-artistic directors Time For Three (TF3), he pioneered a new type of concert experience by producing, arranging/composing and conducting compelling presentations that blended classical with pop. He returns as guest conductor regularly, most recently in spring 2016 premiering a program commissioned by the ISO and Time for Three which combined symphonic movements of Dvořák with songs by Dave Matthews Band.

Hackman is the creative director of :STEREO HIDEOUT:, a music brand that represents the removal of barriers between classical and popular music and the skillful blending of the two. In 2014, he released the debut :STEREO HIDEOUT: album The Radio Nouveau, along with several music videos. The album was mixed in London by Gareth Jones (Grizzly Bear, Depeche Mode) and mastered in Brooklyn by Joe Lambert (Animal Collective, Dirty Projectors).

Steve’s work as a composer and arranger has met with considerable success. The string trio Time for Three and choral ensemble Chanticleer present his works as their showpieces; TF3’s Chaconne in Winter highlights their recent release on Universal Records, and Chanticleer’s Wait Fantasy can be heard on their recent album Someone New. He enjoys a continuing relationship as an arranger for Time for Three, and most recently contributed the arrangement for their appearance on From The Top, two pieces to their holiday EP Yuletime (Universal) and the music for their appearance on ABC’s hit show Dancing With The Stars. Hackman’s orchestrations for artists like Time for Three, The Five Browns, Michael Cavanaugh, My Brightest Diamond, Arlo Guthrie, Aoife O’Donovan and Joshua Radin have been performed by nearly all the major orchestras in America. This season marked his first collaboration with the world-renowned Tallis Scholars.

Hackman was a four-year member, producer and musical director of the a capella group The Other Guys at the University of Illinois, a group that under his direction placed runner-up in the International Competition of Collegiate Acapella at Avery Fisher Hall. He is a prolific songwriter, having written hundreds of songs and releasing several albums of original music. His song “The Pendulum Song” was chosen among tens of thousands as a finalist in the prestigious John Lennon Songwriting Competition, and he has also received honorable mention in the Billboard songwriting competition. He has entertained as a dueling piano player at Howl at the Moon piano bar in Chicago, Indianapolis and Louisville. In season seven of American Idol, Hackman was one of 164 contestants chosen from more than 150,000 to attend Hollywood Week. He finished in the top 64.

Hackman studied conducting under Otto-Werner Mueller and counterpoint/composition under Dr. Ford Lallerstedt at the Curtis Institute of Music in Philadelphia. He subsequently studied conducting with David Zinman at the American Academy of Conducting at Aspen and received further instruction in orchestration from the prolific Broadway orchestrator and composer William Brohn (Miss Saigon, Wicked, Ragtime, and countless others). He served as the assistant conductor of the Reading Symphony for two seasons, where he led subscription, family, education and New Year’s Eve programs.