Tenor Saxophonist, Sophie Faught, talks about being a human and breaking through the burnout. 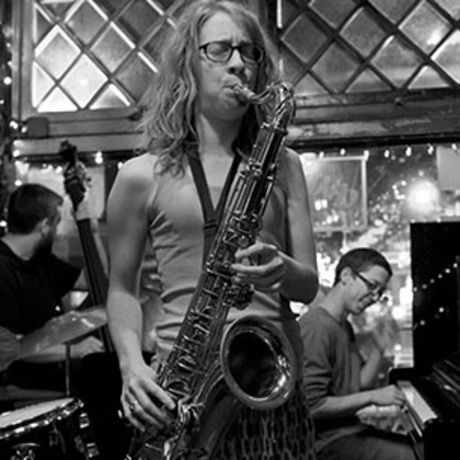 Tenor saxophonist Sophie Faught is an improviser, composer, bandleader, and teacher. Raised up by some of Indiana’s great jazz musicians and educators – Harry Miedema, Brent Walarab, Claude Sifferlen, Mark Buselli, and David Baker – Sophie speaks the jazz language with creativity, wit, passion, depth, and soul. Sophie’s music is mindful of tradition, without being held captive by it.

Sophie has performed in venues across the country and world, including Jazz at Lincoln Center in New York City and the North Sea Jazz Festival in Rotterdam, the Netherlands. She has headlined at the nationally recognized Portland Jazz Festival, leading her own group in original compositions and jazz standards. She has toured as a member of the Nicholas Payton Jazz Quintet, and has also appeared with Jimmy Heath, Slide Hampton, the Temptations, the Four Tops, Terrell Stafford, and Dick Oates. She currently leads her own jazz trio and performs every Wednesday night at the Chatterbox Jazz Club on Massachusetts Ave. DAY ONE was the group’s debut album. The group’s second release, THREE MUSES, is a collection of original music inspired by the paintings of local artist Steven Sickles, and was first presented as a limited edition deluxe vinyl.

Let us embrace the fact that we are human beings with soul power. — Sophie Faught

Really what it was about was the joy of being able to create this, and share it with other people. — Sophie Faught

Whatever it is that you make, make it well, make it to last, make it to serve humanity. — Sophie Faught

There's no such thing as a new idea... so revolution, is really about cycles of knowledge and memory, old ideas becoming new again. Revolution is the remembrance of an old idea, today. — Sophie Faught