All the World’s a Stage: Scottish Rite Backdrops 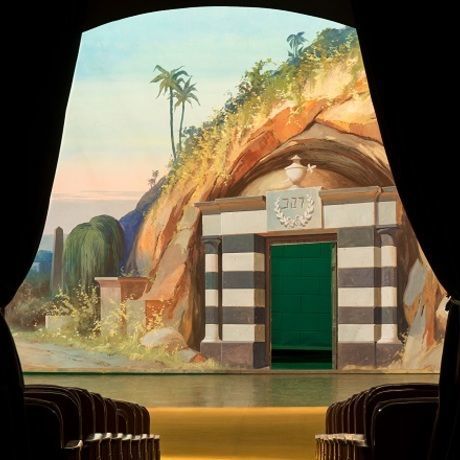 Since 2013 Whaley has been in and out of the Scottish Rite Masonic Temple and its historic theater. Working with the Masons, she has photographed the scenic-style painted backdrops and inner workings of the theater. She notes of the project’s origins: “Seeing the backstage of the theater at Scottish Rite Temple in Santa Fe, New Mexico, I recognized the rarity of the theatrical collection. The 76 backdrops were painted in 1911 and the theater with its props and rigging has remained unchanged. With the generous permission and support from the Scottish Rite Masons, I began a two-part project: one documentary, the other artistic.” Whaley earned her MFA in painting and an additional MA in Visual Design/Photography from the University of California, Berkeley by 1980 and entered the world of theater thereafter as a contractual scenic artist. She painted sets for the San Francisco Opera and other Bay Area theatrical companies. “These Stage Stills also take the viewer back stage, deconstructing the illusion that theater hopes to create and revealing the stagecraft. Theatrical sets are always created with speed and efficiency, intending to look good only from the distance of the audience. Up close they tend to appear crude and in the case of the Scottish Rite temple collection, showing the signs of over a century of use. The camera captures these cracks in the illusion. This series is still in progress. I have fallen down a rabbit hole into a theatrical fantasy world still intact. There is more to explore.” In 2018 The Museum of New Mexico Press will release a book highlighting Whaley’s photography and exploring the history of this recognizable building and theater. Essays by State Historian Rick Hendricks, International Folk Art Museum Director Khristaan Villela, and curator and historian Wendy Waszut-Barrett all illuminate different aspects of the temple and theater’s history.