Page Fehling and Jason Harper ask the question: Will you commit to being your honest, authentic self in your career?

On Friday, October 5, 2018, more than 400 creative Charlotteans gathered together at Savona Mill in Charlotte’s West End, eager to dive into that month’s global theme of “Honesty.” Our speakers were none other than the Queen City’s dynamic daybreak duo of Page Fehling and Jason Harper, co-hosts of Fox 46 WJZY’s popular morning show, “Good Day Charlotte.” 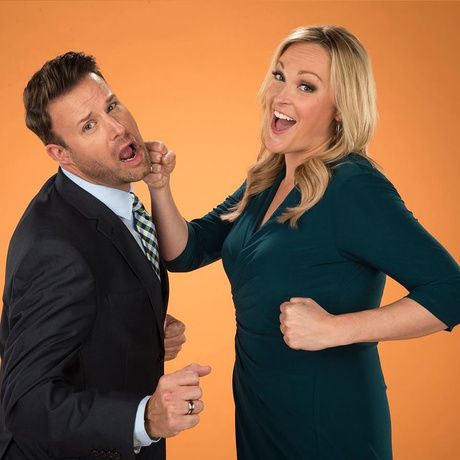 If you’re an insomniac, the parent of a newborn or just a bleary-eyed lover of local morning television, Page Fehling and Jason Harper are your new best friends. Or they should be, anyway. Jason and Page love hanging with you weekday mornings from 4:30 – 9:00 AM on the Fox 46 morning show, “Good Day Charlotte!”

Page Fehling grew up right outside Washington, D.C., but has lived in North Carolina for almost 20 years. Her stint in the Tar Heel state began…well…as a Tar Heel, at UNC-Chapel Hill. She graduated with a journalism degree and then spent two years in the Peace Corps in Honduras digging latrines. Her parents were thrilled with that outcome after paying four years of out-of-state tuition. Page’s life took an only slightly more glamorous turn when, upon completion of her Peace Corps service, she moved to New York City to wear navy blue polyester and make barely enough money to live on Ramen noodles as an NBC Page (yes,she was “Page-the-Page”). During that time she also met the man of her dreams over a “Dumb and Dumber” movie line quote-off. Be still her heart…

Fast forward to today, and Page is now in love with three men and one woman. But she’s married to one and gave birth to the other three, so that’ll teach you to jump to conclusions. Part-time hosting and reporting jobs in New York led to a full-time gig at WNCN in Raleigh and then brought her here to FOX 46 Charlotte. In her “spare time” Page and her husband Jake co-host a podcast called, “Date Night with Jake and Page,” that invites listeners to be a 5th wheel on a get-to-know-you double-date with well-known Charlotteans and their boos.

Page lives in Union County with her immediate family and much of her extended family all on one big weirdo family compound. If that doesn’t make you think she’s insane then maybe this will: Page loves waking up at 2 AM and bringing you your morning news every day. Pinky swear.

Jason Harper is Page’s co-morning-anchor on “Good Day Charlotte,” a coffee addict, and a lover of God, his wife, his FOUR daughters, the outdoors, traveling, cooking, wine and craft beer. Whew! That’s Jason in a nutshell!

Jason married his best friend, who just happens to be his 7th grade girlfriend, in the summer of 2016 and they have the most amazing blended family with FOUR incredible daughters! Not only did he inherit his wife’s two princesses, but he gained a new city, Charlotte! Growing up in Atlanta, Jason always had a thing for the big city. Food, sports, performing arts…traffic! The Queen City has exceeded his expectations! When he’s not waking up at 2 AM to share the desk with Page, Jason and his wife love to travel the south in search of craft beer. They’ve been known to shoot a few videos about their adventures and their Brewed and Blended life!

Jason’s career in broadcasting and public speaking all started when he was a kid. He has always felt right at home in front of an audience, whether singing in the living room in front of family and friends or on a stage at church and school. He had a thing for forgetting the words to songs or lines in a play and learned early on that THE SHOW MUST GO ON! It was in middle school that Jason’s church music director told his mom, “Hey this kid has a thing for making up stuff on the spot! That’s a gift!” After graduating from Belmont University in Nashville, TN with a music degree and traveling as a professional entertainer, life took Jason to Little Rock, AR where his career path would take a major turn.

Jason was working in morning radio when the local ABC news director asked if he’d like to join their morning team as a reporter. Knowing nothing about news or television, he obviously thought, WHY NOT? Eight years later, after hosting three morning shows at KATV, Jason traveled the country as the TV host for FLW, the nation’s largest bass fishing tournament organization. He was hooked by the sport of fishing and fell in love with the families that are dedicated to the traveling lifestyle and was proud to share their passion and stories on NBC Sports for eight years.