A story about potential

On the 22nd of March which was also the World Water Day, we have explored the global theme of Water with Adriana and Marius - architects who passionately organize one of the most beloved community oriented events from Cluj: Someș Delivery – through which it is creatively re-thinked the purpose and the role of the Someș river in the life of the community. Adriana and Marius spoke about Somes Delivery, a “manifesto-event”, in other words about the potential of the water, civic responsibility, their relationship with the community and with public institutions and, in general, about how global issues are solved on a human scale. This independent annual project, initiated by Marius in 2015 together with the Cărturești Foundation, the Chamber of Architects of Romania and the miniMASS Association, “provokes and tests the ideas of the community for the integration of the Someș river in the life of Cluj-Napoca.” Every city has a river to which it relates. The particularity of river Someș is that it has always been considered a strategic resource, a hydropower channel. It was always infrastructure, not something belonging to the people, to whom the time has come for it to be restored. On the long run, the intention behind projects like Someș Delivery is to contribute to bringing Cluj’s inhabitants closer to Somes and turning it into an area of interest for the city’s life.“ Music from Lazar & Sasha from the band Positive John 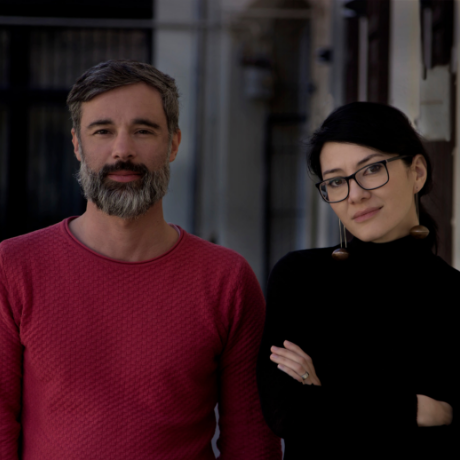 Marius Cătălin MOGA is architect and he finished his studies at the Faculty of Architecture and Urbanism (FAU) from Cluj in 2006. He worked at Planwerk Cluj and finished his internship at BAU. In 2011 he opens his own office Atelier MASS together with three friends, former colleagues. Their former experience brought them already the participation at the Venice Architecture Biennale 2010 representing Romania with the project SUPERBIA. Their presence at the Venice Biennale is regained in 2012 with the project Head up! Through his office he co-produced projects which were awarded at the BNAB 2012 (Temporary scenography in the Cultural Palace from Blaj) and BATRA 2013 (Scenography for the music festival Electric Castle). Between 2013 and 2015 he was responsible for the scenographic design of the Electric Castle Festival. Contest participation in the office was constant and brought a series of prizes. In 2016 the third place with Interim. a pop-up exhibition for Venice Biennale, in 2017 the third place for Re-Thinking Someș (urban planning contest) and in 2018 the second place for Feroviarilor Park (re-designing contest). The alternative experience from the office (workshops and installations) leads to the opening in 2012 of miniMASS, a sister organisation of the office. In 2015, in collaboration with Cărturești Foundation and The Chamber of Architects of Romania, he starts the annual socio-urban laboratory project Someș Delivery in order to emphasize the environmental potential of the river banks of Someș river, a project that was latter nominated and awarded in several local and national events. From 2011-2018 he was associate professor at FAU and from 2013 he started here his Phd. on Temporary Architecture as process for change.

Adriana MĂGERUȘAN is an architect and a teacher. You will find her, most of the time, at the Faculty of Architecture and Urbanism from Cluj-Napoca, with her students. Or near the river, again with her students. She teaches both practical stuff (architectural design studio) and architectural theory. She is interested in urban activism and bottom-up movements - transforming the city into a more friendly space and a more democratic space for the people. In 2014 she obtained her PHD in architecture with the thesis “Performativity in the city. Urban tactics to produce the common space”.
Since 2015 she decided to put into practice the theories about performativity. She is involved in Someş Delivery, a project about transforming back the river into a leaving part of the city, not just a corridor of infrastructure and polluted water. That means delivering the river back to the people, re-thinking the purpose and the role of this river in the life of the community. Mostly, this project is about meeting and working with people that care about the river: locals that actually leave or work near the water, students and young professionals who put together ideas that will bring back the value of a vast river crossing a crowded, big city. Adriana loves the water, she spends at least 2 months, each year, near the river, but she is not a fisher and she really doesnt know how to properly swim. Come and meet her, this year too, at the 5th edition of Someș Delivery. They always have nice boats or canoe, concerts, and interesting debates. Also, if you are handyman, you can volunteer for Someș Delivery and build together temporary installations near the water for everyday life in the city.