In our lives and careers, we all face a variety of eventful “ends,” some self-imposed, and others coming from outside. 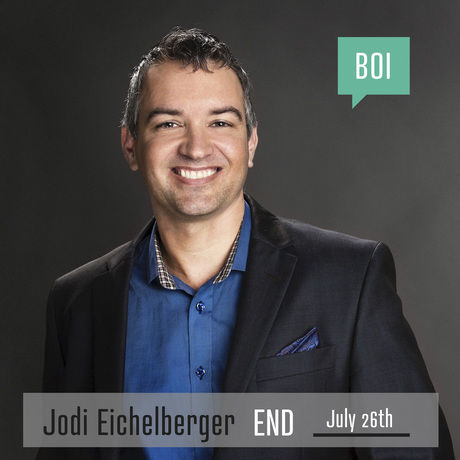 Jodi Eichelberger is the artistic director and host of Story Story Night and the Program Director at Surel’s Place, an artist residency program. Jodi was an active storyteller in the New York storytelling community, including at The Moth, SpeakEasy Stories, and a community storytelling show in Brooklyn he produced called “Stories 4.” He also produced a podcast of personal narratives called “The Acorn People” for several years.

Jodi is best known for his part in the original Broadway cast of “Avenue Q” and for his role as “Stingy” in the international children’s television show “LazyTown” which has aired in the US on CBS, NBC, Nickelodeon, Sprout, and Netflix. He also worked with the Jim Henson Company in film and stage, as well as composed musical scores and written scripts for multiple theaters.

Since coming to Boise, Jodi has performed as an actor with Alley Repertory Theater and Boise Contemporary Theater. He is currently working on a cabaret performance called “Story Story Song Night” which will be performed at the Riverside Hotel in the Sapphire Room on September 27th. He can also be seen with a black sheep puppet lip-syncing live to stories at Story Story Late-Night.