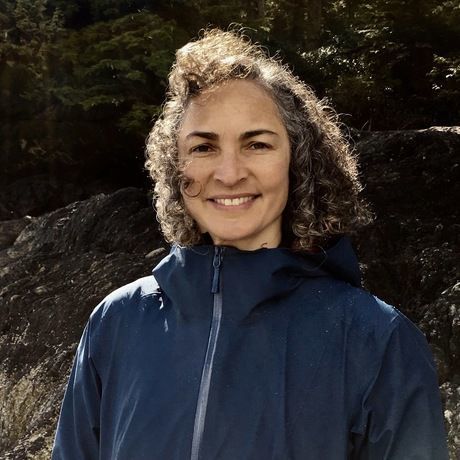 NOTE: Due to popular demand, everyone is asked to join the waitlist starting Fri, Feb 17 from which tickets will be issued via a lottery system.

Prior to founding Aeriosa, Julia performed across Canada with Ruth Cansfield, and around the world with Bandaloop. Julia attained ACMG Rock Guide certification in 1997. She has worked as a co-producer, choreographer, cast member, stunt performer, mountain safety rigger and creative movement consultant on various film and television productions in Canada and abroad.

How do you define creativity and apply it in your career? I define creativity as problem-solving using whatever resources I have at hand. In my work that usually means dreaming, playing, instigating, organizing, sitting with the unknown and uncontrollable, inspiring other people, taking thoughtful risks and keeping one eye on the clock.

Where do you find your best creative inspiration? In nature. And in that magical state between being asleep and being awake.

What’s the one creative advice or tip you wish you’d known as a young person? Experience and wisdom are not always the same thing. One does not necessarily imply the other. Nurture your integrity and be prepared to lead.

Who would you like to hear speak at CreativeMornings? I would really like to hear from some of the other species we share Earth with — got any ancient trees on the list? Any cetaceans? Any fungi networks? My human-centric short list includes authors Ursula K Le Guin and Neal Stephenson.

What fact about you would surprise people? I retired from my career as a contemporary dancer in 1996 - I was burnt out and committed to a starting new career as a mountain guide. Then in 1998 I took a spectacular tumble off a rock ledge on the Squamish Chief. I should have died, but somehow I didn’t. My faith in probability was shaken and my faith in magic carpets was reignited. A few weeks after what I like to think of as my “re-birthday”, I found my way back to dancing wholeheartedly again - but this time - immersed in vertical dance, a practice that continues to provide me with intriguing opportunities for staging performances and shifting perspectives with dance.

What’s the craziest thing you’ve ever done? My very first backcountry adventure was a one month trip, prospecting for gold in the Yukon. My companions were Annie the mule, La Fille the dog and Sylvain the orphan-hermit. We didn’t take a stove, proper boots, or sleeping pads. One night Annie was scared away from our camp by predators, while we slept. We couldn’t carry all our supplies without her, so Sylvain suggested we built a raft and float off the far edge of our one and only map towards the Arctic ocean. I had to put my foot down and insist we loop back south towards the road instead. We cached most of our supplies in the bush and spent a hungry week walking through grizzly territory. When we finally made it to our jeep, we drove up and down the Dempster Highway, shaking a can of oats. It didn’t take long to find Annie, and all of us were thrilled to have survived.

Dance is a community thing; you want to dance with people and for people. — Julia Taffe

For me climbing is a dance in stone. — Julia Taffe

You need the relationships between people in space to actually create choreography. — Julia Taffe