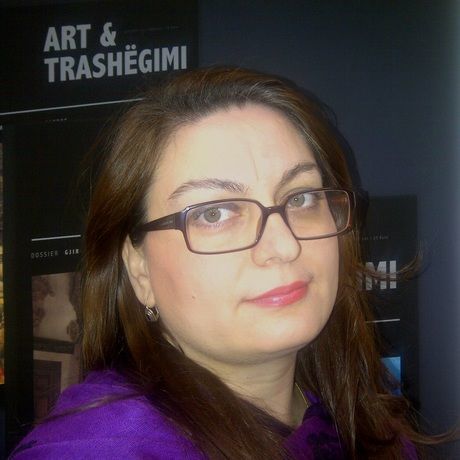 Graduated a Master degree from the Institut d'Études Politiques de Paris and international relations at the Institut de Langues et de Civilisations Orientales (INALCO) in Paris, with extensive experience working in private sector, international organizations and non-profit sector. She is founder and director of the French Albanian NGO, ARGJIRO, since 2006, organization which aims to establish and develop international cultural exchanges and building bridges of cultural dialogue between Albania and Europe. She started her career in Paris in 1997 at the French weekly Courrier International, as a journalist responsible for Albania and Kosovo until 2008. She has served as a consultant for UNESCO from 2002 to 2006. She collaborates with the French quarterly Politique Internationale since 2000. Since 2011 she is working as consultant and a manager of several European projects. She wrote and conducted an EU funded project on the revitalization and digitalization of Historical Museum of Shkodra a project that was finalized in September 2015. Since the age of 11 she was host at the Albanian National Television. She has a long career in Media in France and several collaborations with documentaries with Arte, Canal +, France 2 and France 24. Executive Director of ARGJIRO and the Albanian periodic Art & Trashëgimi (Art & Heritage). Fluent in French, English, Italian and Albanian with over 21 years of work experience in media, international administration and policy. Cultural heritage and media development expertise blended with professional training activities, project management and policy development. Experienced cultural manager and publisher with proven skills working in the field of cultural heritage promotion and preservation in France, Albania and in South East Europe.