In May, Ian Schneller of Specimen walked us through his process creating his one of a kind pieces. 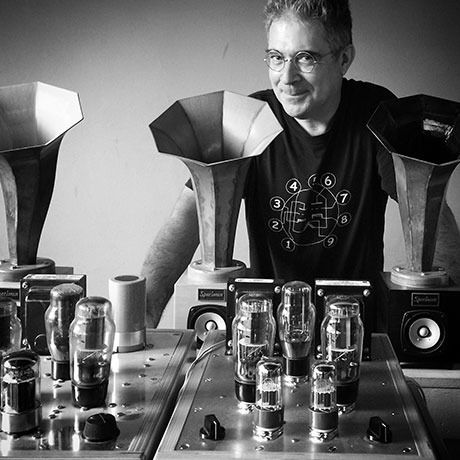 Sculptor/luthier Ian Schneller, owner of Specimen Products, has been designing and building custom guitars, tube amplifiers and audio horn speakers for 25 years. Schneller began creating his Specimens while completing a Master’s Degree in Sculpture from the School of the Art Institute of Chicago. While there he started building instruments including a full-line of aluminum guitars. His work soon expanded to include tube amplifiers and horn speakers.

In 2010 the Sonic Arboretum, a collaborative project between Schneller and composer/violinist Andrew Bird, debuted at Guggenheim Museum in New York. The Sonic Arboretum consists of a “forest” of horn speakers powered by tube amplifiers that serve as a compositional garden for Bird who creates new site-specific compositions for the exhibit. In 2011, the Sonic Arboretum exhibited at Chicago’s Museum of Contemporary Art for a month-long installation and two sold-out performances.

Schneller is also founder of the Chicago School of Guitar Making where he teaches guitar repair, guitar building, and tube amplifier building. Since opening in 2005, more than 1000 students have been under his tutelage.