Gerry Farrell shares his F.L.I.P. philosophy challenging us to Feel Less Immediately Pessimistic when faced with an ugly situation.

Gerry Farrell, former Creative Director at the Leith agency in Edinburgh and founder of Gerryfarrellink.com spoke on the topic of Ugly. During his inspiring talk, Gerry shared his F.L.I.P. philosophy, challenging us to Feel Less Immediately Pessimistic when faced with an ugly situation. 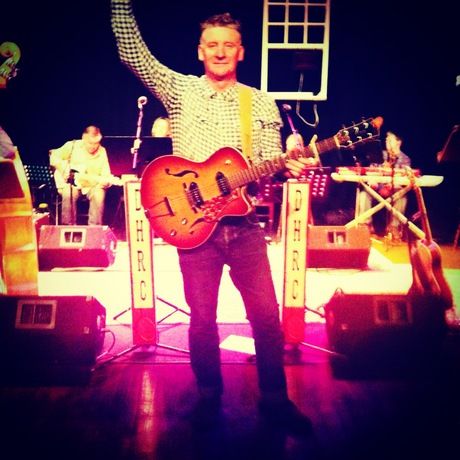 When Gerry was born, the milk was delivered by horse and cart and a fishwife used to walk from Newhaven up to Greenbank every Friday with a basket of herring on her head.

He learned how to write on a little slate with a piece of chalk. Gerry’s Primary 7 school report card said “inclined to be cheeky”.

The first ad he remembers was a sign outside a felt warehouse that said “Get felt here.” The first ad he got published was for a furniture shop. It said “Forget the silk lingerie this Christmas. Buy her wooden drawers.”

He joined the Leith Agency in 1987 before the internet was invented. It had only 12 staff. By the time he left there were 132 Leithers and the agency had won every award you can win in the world including Cannes Lions and D&AD. Gerry has served on both those juries.

The highlights of his career are: 1) spending an hour in his hotel bedroom with Sean Connery 2) winning the pan-European Honda account and doing the world’s first viral marketing campaign for a car launch in 1999. 3) Hibs being the first Edinburgh team to win a Cup Final 5-1.

The low point of his career was criticizing an Edinburgh councilor on Twitter, offering to meet him and sort it out face-to-face, then being Photoshopped in the Evening News in a boxing ring wearing Irn-Bru-branded shorts throwing a punch at said councilor for which he was suspended from work, fined several grand, put on a Final Written Warning and made to stand in the corner.

Gerry left Leith in June to start his own coaching and creative consultancy Gerry Farrell Ink. Gerry will be publishing a book this year called the Flipbook and he’ll be talking about this today.

When he’s not working, Gerry is flyfishing, flytying, playing guitar and singing in a country band called The Downrights or following the mighty Hibees.