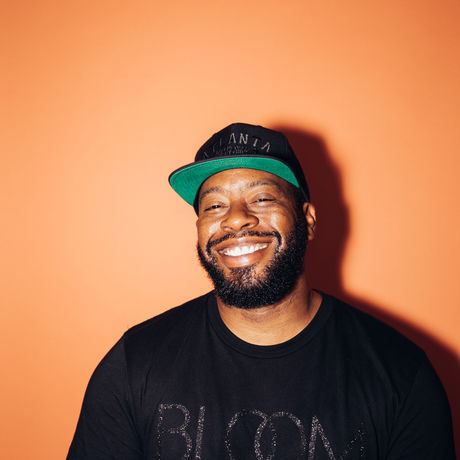 Born in Fayetteville, North Carolina, Williams studied fine art at East Carolina University. After working for 13 years in the advertising industry with a long list of clients from Nike, Warner Bros to HBO, he decided to move to a purely expressive practice, where he had the freedom to express more political and socially relevant contemporary themes.

Assessing and updating the Black Arts Movement’s centering of a racialized aesthetic, Williams’ vibrant and sometimes neony illuminated art interrogates both the liberatory and oppressive forces at play in black American life. In his entire body of work, Williams employs a broad scope of source material from commercial illustration, classic portraiture, and hip-hop iconography, to confront issues of race and the larger public’s oft uninterrogated consumption of black cultural icons and products. Williams’ early realist paintings were of the men who he played pick-up ball with on Venice Beach, California during his stint in marketing and design.

Through his formal education, Williams cultivated an interest in realism, particularly the work of Italian painter, Carvaggio. He also is stylistically inspired by the naturalistic works of Norman Rockwell. His series Rockingwell, an homage to Rockwell, re-imagines Rockwell’s depictions of America through a racial and pop-culturally informed lens. In much of his work, Williams often idealizes the seemingly ordinariness of black life and situates hip hop icons and everyday citizens alike in sometimes idyllic and sometimes imperfect postures.

Fabian’s works have been featured at Art Basel, on CNN, Headline News, Great Big Story, in The Los Angeles Times, New York Times, Playboy Magazine, The Atlanta Journal-Constitution and a host of other media outlets.

I stepped from beyond my desk and went into the street. — Fabian Williams