Askew One is a multi-disciplinary mostly self-taught artist, better renown for his graffiti art.

From Batman comics to spray painting trains, Elliot O'Donnell speaks about his identity as a street artist and shares some of his favorite works. He also addresses the difficulties of working as an artist in New Zealand and challenges us to embrace our differences. 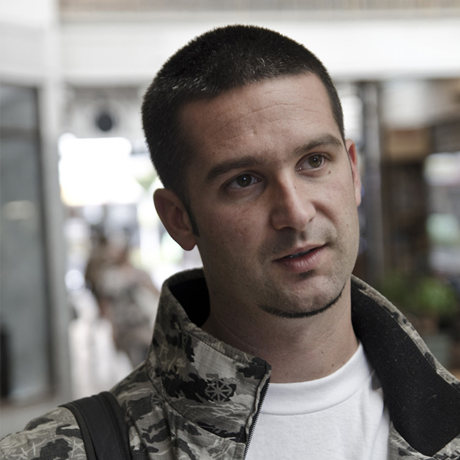 Askew One is a multi-disciplinary mostly self-taught artist, better renown for his graffiti art. Widely regarded as one of the New Zealand graffiti scene’s driving forces, he has managed to remain at the forefront of the movement whilst working tirelessly behind the scenes in a diverse array of projects.

A restless personality, a touch of ADD mixed with a childhood amidst the 80’s sugary-diets, TV parenting and general explosion of mass pop-culture shaped Askew during his formative years. His work draws greatly from New Zealand’s geographical isolation and its subsequent desire to feel inclusion through pop-cultural appropriation.

Although working primarily in aerosol paint, Askew is versed in graphic design, illustration, photography, publishing, music and moving image. He has travelled abroad partaking in many art events including Art Basel Miami 2009 and 2010, collated and co-authored a book about New Zealand graffiti entitled ‘In-Form’ (2008 Montana Book Awards finalist) and has progressed exponentially in music video directing from his first days of making short graffiti videos for himself and his friends in 2009. 2011 has seen Askew push further forward with the launch of his own online store, the release of his first music video to be serviced to U.S television and stepping into the fine arts world with an art residency at The Fountainhead Residency (Miami, Florida). Askew continues to progress above and beyond with all his art-disciplines at hand, making him a unique, self-sufficient and influential artist.

Start building a network of people around you that have the same goal. — Elliot O'Donnell

If you want to exhibit, don't feel like you have to do it on somebody else's terms. — Elliot O'Donnell

If you want to be acknowledged overseas you need to embrace your points of difference. — Elliot O'Donnell