Edreys Wajed challenges us to take the stairs and seek change.

Stop waiting on elevators and break the ‘WOE Cycle.’ Make something happen: be the change. Edreys Wajed’s story and message about driving destiny resonates strongly with the re-emerging city of Buffalo, inspiring all of us to actively pursue change, not wait for it. 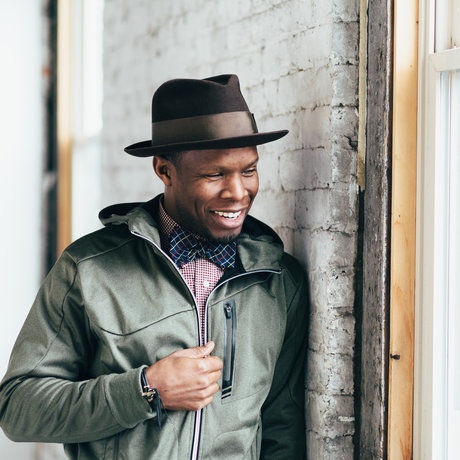 Edreys Wajed is an exceptional product of the Buffalo and SUNY public school systems, graduating from City Honors and Buffalo State College respectively, majoring in Graphic Design with a minor in Business. Edreys has often been referred to as a “Renaissance Man” with many years of experience, successes and awards as a visual artist, traveling entertainer, educator, and entrepreneur with a strong history of community involvement and influence. His goal is to use his cache of talents as a means of communicating, connecting, and inspiring communities for positive change.

As early as 14 years of age, when his mother invested in a pair of hair clippers for him, seeing as she could no longer afford to pay for his haircuts, Edreys taught himself the trade of barbering and soon began making money for himself. With his artistic ability he also began growing a client base and reputation for customized hats and clothes as well as logo design by hand, long before learning graphics in college. Edreys has always had the spirit of entrepreneurship and connecting his talents with purpose as a means of making a living.

Having exhibited his artwork at various places around the country; as a business owner, having run his own stationery boutique and art gallery shared with his wife; having toured nationally and internationally as a hip hop artist, Edreys considers himself a walking enterprise. His latest endeavor, or tool being added to his tool belt, is the fine craft of jewelry making, passed down from his father and master craftsman, in which he aims to make a legacy business for his sons and generations after. “I intend to effortlessly live the life of my dreams,” he concludes, and hopes that his work and efforts influence and fuel other peoples quests to unleash their bottled potential.

When you take action, you stop operating from a 'what if?' standpoint to a 'what now?' standpoint. — edreys wajed

You have to put action into things in order to see change. — edreys wajed

If we personify change, it's very wise. — edreys wajed