Championing creativity as an aid to literacy

Deborah Bullivant joined us to explain her journey of creating the magical space that is Grimm&Co. Giving children a place to be playful and create an environment where children could have the courage to try without fear of being wrong. 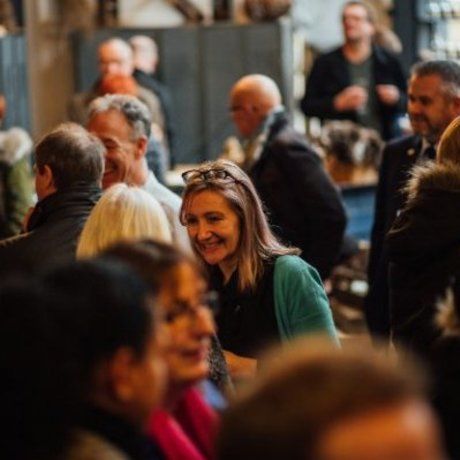 Deborah Bullivant, Founding Director of Grimm & Co, (a charity changing lives, one story at a time) in Yorkshire.

Deborah is an educationalist, creative and social entrepreneur who built Grimm & Co on a bedrock of robust research that set out the design and philosophy blueprint for a successful writing centre in Yorkshire for children and young people.

With a background that spans across all fields of education, starting as family learning tutor, then as headteacher, on to national roles leading on quality in education. Specialising in literacy, Deborah’s core fields of work and study have involved creative educational approaches to narrow the gap for marginalised children, young people and adults. Due to unforeseen and somewhat challenging circumstances during Deborah’s later teenage years she left school with no qualifications and at 19 was a single parent. This has meant that Deborah’s own journey has been far from traditional. She describes it as being stopped suddenly by a giant landslide – she had to rebuild the road before she could get back on it but by the time she had she’d become a more equipped and confident driver – and along the way she’d learnt how to build roads and used the boulders that had been barriers as stepping stones.

Grimm & Co: The magical apothecary has been supplying evil plots, wild schemes and kitchen wares to beings of all types (even those of a wicked persuasion) since 1148 (just before lunchtime), going visible to mortals on 29th February 2016. Hidden behind the shelves of wonder, an imagination gym puts your brain through its paces before climbing the giant bookcase to the ‘writers’ pad’. Here the true magic take place as children and young people’s hidden writing persona is revealed, all leaving as wordsmiths down the magical beanstalk back to the mortal world.

At a time when the landscape for learning was shifting, Grimm & Co was in the making. It all started with a £3 million project in Rotherham to find out what would make the greatest difference to children’s literacies – especially the most marginalised. The research (with the University of Sheffield) concluded, funds ended in 2011 and the outcomes and results were staggering. Qualitative and quantitative data demonstrated the key ingredients to changing children’s narratives. Starting with a £0 budget and a team of 1, Grimm & Co’s foundation stone was laid. Local support + children and young people’s steer helped to direct and build the project – from businesses to artists, everyone believed in the project which was further inspired by the Once Upon a School Ted Talk by Dave Eggers and the work of the Ministry of Stories. The 826 model and philosophy aligned beautifully to the outcomes of the research so Grimm & Co joined the 826 and MoS family.

Deborah will be joining us as we return to Jaywing