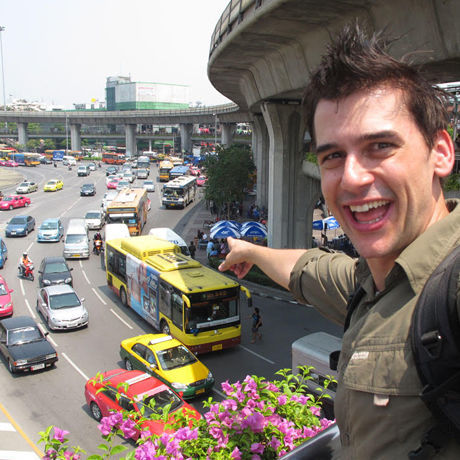 Daniel Fraser is a travel company entrepreneur, television host, and event MC, based in Bangkok, Thailand.

With an appetite for fun and the energy to match, when something is happening, Daniel is often at the center of it. Dan first came to Thailand in the mid 1990’s to work on consulting and teaching projects under the Thai Royal Family. As the quintessential host, it was a natural step for Dan to get into the travel business. Today Smiling Albino is among the premier luxury adventure outfitters operating in Thailand, Cambodia, Vietnam, Laos, Nepal and more.

A well-recognized figure in Thailand, Daniel has appeared in numerous print and television ads across Asia, as well as various travel tv and online promotional programmes. Daniel co-starred in Thailand’s first digital feature film, The Garuda, in 2004 and has regularly been named a Tourism Ambassador for the Tourism Authority of Thailand. A regularly invited presenter at tourism industry conferences, in 2012 Daniel was also awarded the ‘Most Promising Young Entrepreneur Award’ from the Thai Canadian Chamber of Commerce.

Daniel was presenter for the popular national TV series in Thailand called Long Krung ( หลงกรุง) on Thai PBS, a Thai-language documentary series investigating unique sides of Thai culture through the eyes and voice of a resident Canadian. Over 100 episodes were aired between 2011 and 2013. As of January 2014, Daniel is the television presenter of a Thai TV 5 culture and food programme called “Farang Song Thai” on Saturdays at 15:35-16:00.

In March 2014, Daniel was awarded a national award by MThai Media Group for being chosen as one of the most talked about media personalities online in Thailand. “MThai Top-talk about 2014″

As media personality, event host and expert on SE Asian travel, Daniel often hosts guests on private itineraries throughout the region, appears on various travel, cooking, and documentary programs, and generally tries to out-eat everyone he meets.