If something is worth doing, it’s worth overdoing

Adriana Skálová What is a good end of human life? 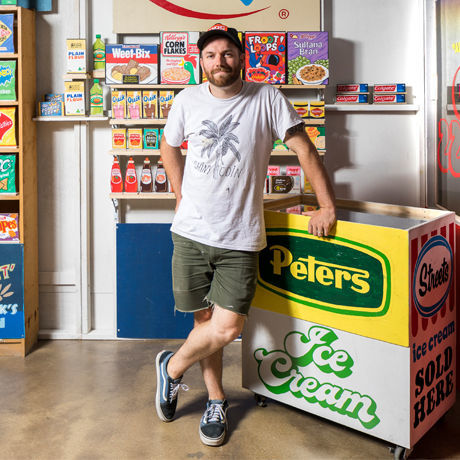 Callum Preston is a multi-faceted artist and designer from Melbourne, Australia. He is known for working across many mediums, illustration, mural work, signwriting, sculpture, video and print. He has been a part of the Melbourne street art scene since 2002, joining the Everfresh crew and studio in 2005, over the following years he has exhibited in an array of group shows in Melbourne and all around Australia. He has completed public works in Melbourne, interstate and internationally as well as feature projects such as painting the bow of the Sea Shepherd Sam Simon anti-whaling ship, been commissioned by the NGV for murals inside the Jean Paul Gaultier retrospective show and traveling to Vanuatu to create works in local communities as part of “The Wanderers” television program with studio mate and fellow artist RONE.

Outside of his mural and studio artwork, he is known as a talented artist & creative director in the Australian independent music scene, specifically punk and hardcore, having created books, mini-documentaries, music videos, album artwork, stage banners, props and a massive amount of merchandise designs for a massive array of musicians such as Something for Kate, Parkway Drive, Violent Soho, The Smith St Band, Alex Lahey and The Amity Affliction, aswell as being commissioned by companies such as Converse, Vans, Cotton On, Smith&Daughters, Collingwood Football club, Google and Vic Roads to create artworks, installations and interactive window displays

He mounted his first solo show in 2015 paying tribute to Back to the future with his show “Bootleg to the future” including a full-size wooden replica of the Delorean time machine. His show “Content by the Kilo” in Brisbane featuring 100 hand painted butcher shop style signs in mid-2017 was a sellout. In late 2017 he released his second Melbourne solo show “Callum Preston’s MILK BAR” which was a full-size replica of his childhood milk bar featuring almost 500 individually hand painted replicas of all of the products in the store. It was acquired by the Sandrew Collection and has been kept together as a single work. He was a featured artist in the recent “Untold.Melbourne” project at the Nylex silos. His installation was a modern take on the traditional stain glass windows and was sold in the charity auction for $10,000 benefiting the REACH foundation.