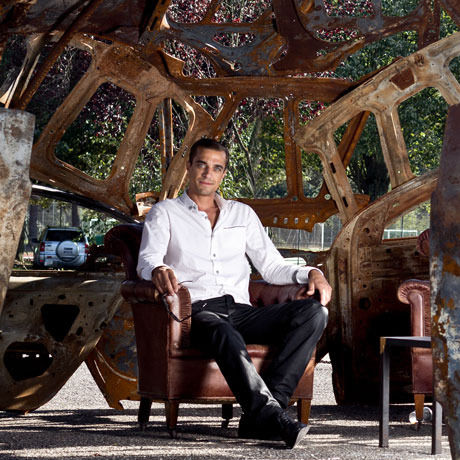 “Opulence and decay find form in the sculptures of Swiss artist Boris Gratry, who works with found metal scraps that are then rusted and embellished with gold leaf. The resulting abstract compositions are reminiscent of acclaimed minimalist artists such as Donald Judd and Richard Serra.

Gratry collects his materials by hosting large happenings during which a totaled automobile is set on fire and then violently cooled with water, changing its form and preparing it to rust. Variations in temperature and preparation time dictate the metal’s initial coloration, which the artist then accentuates with gold leaf appliqué. In doing so, Gratry opposes notions of polarities: beauty vs. brutality, attraction vs. repulsion, wealth vs. poverty.

By transforming scrap metal into something precious, the artist performs a kind of alchemy, elevating his materials from the mundane to the extraordinary.”

Boris Gratry will talk about the birth and evolution of the Minimalism movement. He will share with us his views on the importance of what he calls “Contextualisation in art”, in other words, how different art movement emerge into new art forms depending on the context (for instance, from Minimalism to Materialism or from Minimalism to Contemporary Art).