Nuno Coelho Design as a tool for collective memory

It’s our last talk of 2016, and keeping with tradition, we’ve invited three of our audience members to take the stage to speak on December’s global theme; Sound. In her talk Anna Brenner explains why man made monsters, Chakka Reeves shows us how the importance of mentoring our youth, and Emily Belden tells us about the importance of being your true self. A huge thanks to our 2016 Partner Braintree and the rest of our sponsors who make these events possible. You guys rock! 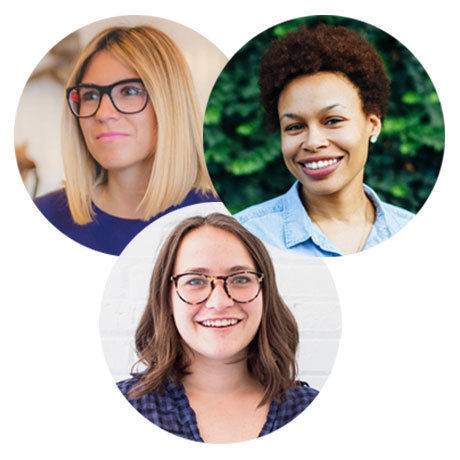 Emily Belden Emily is an author for powerhouse publisher, Harlequin. She inked a two-book deal with them in 2016, and her debut novel Burned will come out in 2017 via their imprint, Graydon House. In 2018, Husband Material will be released. Born and raised in Chicago, Emily tiled her bedroom floor in over 60,000 pennies – all heads up for good luck. Local media heard about The Penny Floor and ran the story, which was eventually picked up by The Today Show, who interviewed her live on their show. Her journey has since been chronicled by Michigan Avenue Magazine, The Chicago Sun Times, and many other media outlets and blogs. She is repped by famed literary agency, Browne & Miller, as well as 44 Blue Productions out of Burbank, who is adapting her memoir into a comedic series.

Chakka Reeves Chakka Reeves is a digital storyteller, educator and creator of Highwater, an email magazine and companion podcast dedicated to the stories of artists and creatives. Chakka has created digital storytelling campaigns for organizations such as the BlackStar Film Festival, Art Sanctuary in Philadelphia PA and Kindling Group in Chicago, IL.

Her work as an educator and educational consultant includes partners such as After School Matters, Alternative Schools Network (Chicago), Columbia College Chicago’s Convergence Academies Program and School of the Art Institute’s Continuing Education Department. Chakka is currently the coordinator and lead instructor for ATM — The Art, Tech and Media Experience, a project funded by the HIVE Chicago Fund for Connected Learning that teaches alternative school students the basics of video production, photography, graphic design and web development.

Anna Brenner After reading Frankenstein in an eco-criticism college course, Anna chose to study manmade monsters in environmental and sociocultural contexts as a formal English literature major (with an informal concentration in body studies) at George Washington University. She received the 2013 Luther Rice Undergraduate Research Grant to study manmade monsters in cinema from 1931 to 1960, choosing to conduct her studies at UCLA. After graduation, Anna immediately began working as a production assistant on Batman vs Superman, but soon began using her long working hours to learn web design and basic front end development. She moved to Chicago on a whim and it’s the best decision she’s ever made – after graduating from General Assembly’s User Experience Design Immersive, she began working as a Jr Design Consultant for DevMynd Software.