“90% of all good are transported over water – that has to change,” states Arjen van der Veen during the opening moments of his talk. As one of the founders of ashipping business, it’s an unusual perspective. But Fairtransport, the world’s first modern emission-free shipping company, isn’t like its oil-powered competitors. Alongside his friends at the company, Arjen created Tres Hombres: and made his dream of carrying cargo under sail a reality. He proposes a better way of doing business – using natural resources to power shipping processes, instead of pollutants. His approach requires patience, persistence and a healthy dose of naivety to reach its destination. 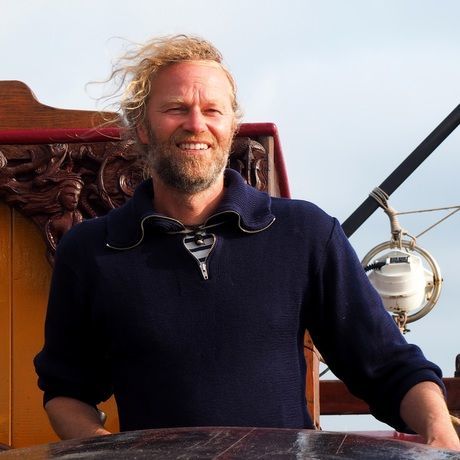 Arjen van der Veen (Leeuwarden, 1974) is the driving force behind Fairtransport, the world’s first modern emission free shipping company he initiated together with two friends. And with the creation of Tres Hombres Shipping, Arjen made his dream of carrying cargo under sail a reality.

He is a fearless go-getter, never to stop anyone and always weighing up new ideas and possibilities with each other, in order to arrive at the best solutions. Through his enthusiasm and social skills, Arjen reaches a large audience. His extensive experience at sea and knowledge in the field of trading routes gives him the opportunity to develop new markets. As a captain, he is skilled in training derailed youngsters into responsible sailors. He is a troubadour in heart and soul.

“Believe in yourself and you can go as far as your dreams.” — Arjen van der Veen.

Without the volunteer help to start a company with no money it was not going to work. You need a community, a building community, that spreads the word itself—they're all ambassadors, you need them to build the ship, or a project like this. As you know, 'cause you're all creative people—If you're creative, you find creative people to realize something, right? — Arjen van der Veen

We came aboard the Europa to say: "Is there another way of transporting goods from A to B, without having pollution?" Well, it was obvious that WE were transported across the Atlantic, by sailing vessel. So, why couldn't we then transport coffee, or cocoa, or olive oil to and from the Carribean? — Arjen van der Veen