Ben Flores Grammar can be WONDERful for creatives

Akira Satake discusses the moments throughout his life that come together to create his body of work from photographer to musician to ceramic artist.

In his work as a potter, Satake considers the act of creation a collaboration between himself, the clay, and the fire. In this context, collaboration means finding what the clay wants to be and bringing out its beauty in the way that the beauty of our surroundings is created through the random hand of Nature.
His approach to life can be seen much the same way; not to face it as a series of obstacles or opportunities, but as limitless chances to engage, or collaborate, with the moment.
He will discuss his multiple passions for ceramics, photography and music production, and how his life philosophy has shaped and propelled each of these careers. 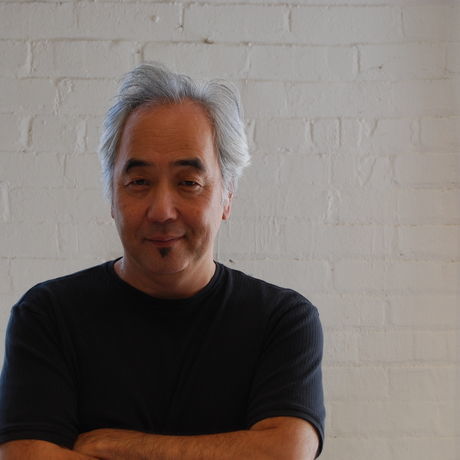 Akira Satake was born in Osaka, Japan, where his first serious passion was American roots music. In his early teens he taught himself to play guitar and banjo listening to his older brother’s Doc Watson and Flatt and Scruggs recordings. He played in music clubs throughout high school, went on to study another passion, photography, at Osaka School of Visual Arts, and worked as a studio photographer for four years.

In his early 20s, Akira relocated to New York City and spent two decades honing his innovative banjo playing in venues from Village clubs to Lincoln Center and Carnegie Hall. He went on to master the shamisen (Japanese banjo) in his own original style. Akira’s collection of original compositions, “Cooler Heads Prevail,” won the 1998 German Music Critics’ Award for Best World Music Recording.

In the early 90s Akira also started up a music production business and partnered in a World Music record label. Twelve high pressure years in NYC’s music scene ultimately drove him to seek a creative outlet in order to destress, and he found this outlet in ceramics.

From his first class at Greenwich House Pottery in NYC, he knew he was meant to be a potter.

Akira quickly found an audience for his ceramics and began doing craft shows in NYC and the metropolitan area. He decided to leave NYC in 2003 in order to find a place where it would be more affordable for him to have studio space and kilns, and in 2003 he and his family moved to Asheville, NC.
Here he continues to pursue his passion and has built several kilns, including a gas fired and a wood burning kiln. In 2013 he opened Akira Satake Ceramics/Gallery Mugen as his working studio and exhibition space in the River Arts District in Asheville. He has been invited to give workshops and presentations in France, Belgium, Australia, Israel, Spain and Indonesia, and his work is widely sought after by collectors around the world.

The Philadelphia Museum has given him the National Award for Excellence in Contemporary Clay, and in 2015 “A Craftsman’s Legacy” - a national weekly television series on PBS - featured his life and work.

It's a collaboration between me, the fire, ash and the clay. So... it's many things that are very surprising. — Akira Satake

As long as you have some passion, it's great. It doesn't matter if you are going to do it for the future or not. — Akira Satake

When I am making some kind of mistake, I don't just ignore or feel bad, depressed - just step back and see that the result might be very interesting and might come back again and again. — Akira Satake