The arts helped me cope through trauma and tragedy. I began to look at life as a Blank Canvas and my paint brushes were poetry, music, theater, photography, and film

Aitina shares her personal story of being labeled as a “Failure to Thrive” enduring the pain of losing her bio mother to drugs, dealing with trauma, overcoming statistics through the help of her faith, community, and passion for the arts. She explains her outlook on life and how her pain led to passion which ultimately led to her purpose which is rooted in utilizing her skills, gifts and talents that she gained to ignite change within others. 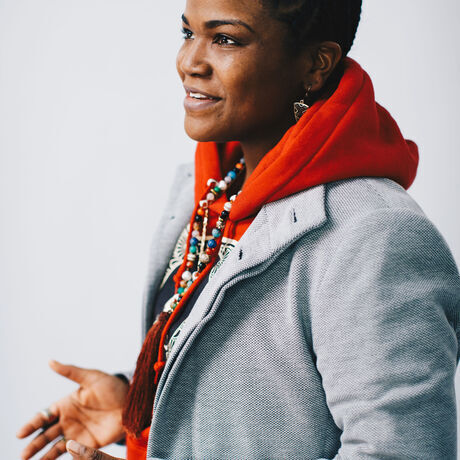 Aitina Fareed-Cooke “A.I. The Anomaly” was told at a young age that she would be a “failure to thrive” as a result of her biological mother’s addiction to drugs. At 14 months old her and her siblings were placed in foster care. Aitina was just three years old when her mother died of a drug overdose. ​After this tragedy, her story could’ve led down a dark path but a glimmer of hope came with a pen, paper, and a flash of the camera. It takes a village to raise a child and Aitina was no different, it was through the support of her Buffalo community (her adoptive mother, mentors and youth programs) that helped her turn her pain into purpose.

At six she was introduced to writing as a way of releasing any pain due to trauma. She was told by a counselor to express herself through words. Aitina embraced this art and began to create stories and poems which later developed into music.​ Through YO! Buffalo (Youth Opportunity) a local program Aitina was introduced to various organizations and programs throughout Buffalo, one of which was​ ​CEPA Gallery​, a full-service contemporary photography and visual arts center. It was at CEPA Gallery where Aitina learned about the magic of photography. Aitina learned to rewrite her story and give other young people from similar backgrounds the power to do the same.

Now, not only does Aitina stand out as an entrepreneur, owning her own photography & film company called​ ​Get Fokus’d Productions​ but she is a woman devoted to her faith in God and giving back to her community. Fully invested in her efforts to reach the next generation of young artists in Buffalo, she uses proceeds from her music and company to provide tools and resources for young artists and entrepreneurs. Aitina is an award-winning photographer and an accomplished Christian hip hop artist, A.I. standing as the first female to be signed to one of Christian hip hop’s notable labels, God Over Money. She has been recognized by 43North’s Ignite Buffalo winning the People’s Choice Award, CEPA Gallery-Exhibition Award, the National Society of Leadership & Success-Excellence in Teaching Award, Kingdom Choice Award, and more.