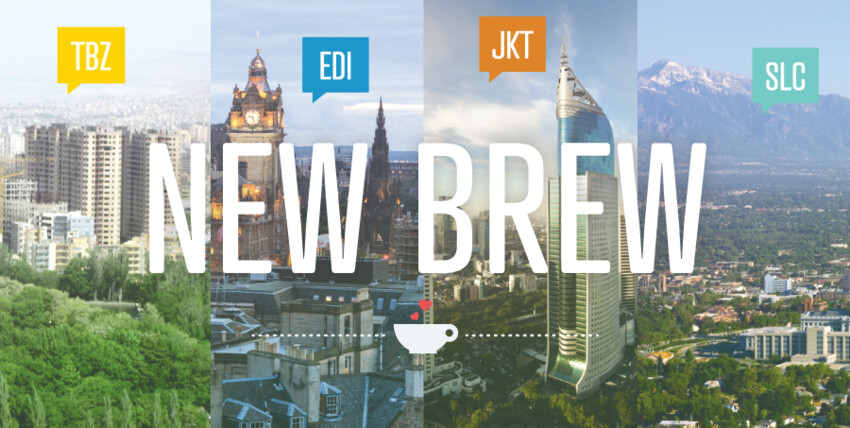 As the good word of CreativeMornings is spreading around the world, we’re thrilled to introduce to you our new chapter hosts in Salt Lake City, Tabriz, Edinburgh, and Jakarta. Please welcome our newest additions! Which CreativeMornings chapter would you like to visit and why? This is a tough question—two of my biggest weaknesses are making choices amongst many interesting options and a completely insatiable travel appetite. At the moment, though, I would love to visit the Helsinki chapter. My grandma was born in Finland and it has always been a place that has inspired and influenced me, creatively and otherwise.

What excites you? Unexpected shared moments when people expand what they think is possible— and in ways that they couldn’t have done without the other’s presence and participation. It never fails to completely delight me.

What have you failed at? When I was a kid, I set out to become Danny Elfman. It still hasn’t happened. I have also failed in a variety of other circumstances but this has proven the most disappointing one.

Who would be the ultimate CreativeMornings speaker? It’s probably cheating to say Danny Elfman again, right?

I would actually say Olafur Eliasson, though. His perspective, breadth of work and mastery of light and structure is thrilling to me in every circumstance I encounter it.

What do you consider your greatest achievement? Learning how to trust my own intuitive voice while still listening to others, both in life and creative work. Also, my three year-old son Perry and the bowling score I have developed as a result of his inexplicable obsession with the game.

What’s your vision for CreativeMornings/Salt Lake City? To create a space where the silos in which we categorize creativity are challenged and new people meet each other in new ways as a result. Salt Lake has such incredible people and potential and I think there are so many great connections waiting to be had. Which CreativeMornings chapter would you like to visit and why? Definitely New York. I would like to visit the Big Apple and would love to meet Tina, Kevin and Sally in Dumbo.

What excites you? The word of “Design”. The way that a good design solves a problem and makes the world a better place to live.

What have you failed at? It is perfectionism at the top of the list. Sometimes I want to do something perfectly but I do nothing!

Who would be the ultimate CreativeMornings speaker? For me it would probably be Reza Abedini. Not just because he is one of iconic Iranian graphic designers but also he has many important things to say. He shows us how it is possible to be eastern and modern at the same time.

What do you consider your greatest achievement? I find most enjoyable things to do and even get paid for doing them. Beside my job, I run a local weekly meetings called Gap Graphic .

What’s your vision for CreativeMornings/Tabriz? My friends and I at TBZ CM really like to create an environment for people to be more creative. What excites you? Hearing about other people’s inspiring and/or heartwarming life stories, learning new skills and snow.

What have you failed at? Bechamel sauce - consistently. And being satisfied with my own work.

Who would be the ultimate CreativeMornings speaker? Ed Catmul, co-founder and president of Pixar.But closer to home I think there would be a lot to learn from Sir Sean Connery, “the sexiest man of the century.”

What do you consider your greatest achievement? I don’t, not yet anyway, maybe I’ll get that sauce right one day.

What’s your vision for CreativeMornings/Edinburgh? A mix of well known and less known speakers that engage and inspire. I want to help build and foster a creative community in my city that transcends disciplines from tech to design, all through the medium of engaging talks, stunning venues and bacon. Which CreativeMornings chapter would you like to visit and why? Hong Kong. I always wanted to go Hong Kong and consume the city, the people, the buildings. So of course I wanted to meet their creative scene within CreativeMornings. And Bogota, to pay a visit to our chapter’s awesome buddy.

What excites you? I’m a fire element kind of person, therefore it’s desire and passion that motivates me to go through challenge in life. I believe in sparks. And that every people have something to appreciate. Also, a good cup coffee. Sometimes three.

What have you failed at? To have been wanting that kind of excitement stays for a longer period of time. Boredom is my biggest burden. I don’t have choice other than keep moving. Hopefully, forward.

Who would be the ultimate CreativeMornings speaker? Some part of myself secretly want Jokowi to tell his stories in CreativeMornings Jakarta, because he was once a number one figure in Jakarta, then now a number one figure in Indonesia. And he’s very keen on Indonesia’s creative industry. Yet, the more rational part of me wants Leonard Theosabrata instead. The man behind so many awesome things happening in Jakarta’s creative scene these recent years. Working on it!

What do you consider your greatest achievement? To be able to let myself, as a unique individual, to be genuinely evolved.

What’s your vision for CreativeMornings/Jakarta? Jakarta is full of chaotic infrastructures and corrupt government. But Jakarta is also a city of promise, for every layers of its society. Jakarta’s creative scene is filled with people between high dreams and tough reality. We struggle to preserve our idealism and freedom to create, yet we still have to spare some pretty big time to pay the bill and to be idle in the traffic jam.

That’s what we’re going to capture. To share hopes and dreams amongst the passionate creative people of Jakarta.