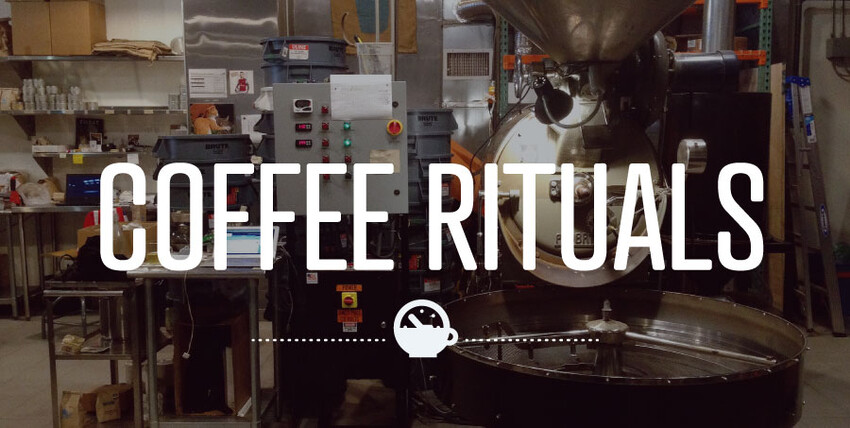 Titlecard icons are coffee designed by Phil Goodwin and clock designed by John Caserta, downloaded from the Noun Project.

It’s near 7:00 a.m. in the morning, West Coast time, when I prepare questions for roaster, Justin Rodriguez at Blue Bottle Coffee. I haven’t had coffee yet, and more than likely this will be one day where I refrain from what is a daily ritual for many coffee drinkers.

With a clear and un-caffeinated mind, I ponder about talking to a living roaster, his process, how creativity factors into the art that is roasting that ends up consumed daily by creatives and the like. I’m really excited to talk to him about failure and his journey to getting to a right roast.

And now our conversation.

Chérmelle: Good morning! It’s about 10 a.m. New York time, did you have coffee this morning?

Justin: Good morning—afternoon now, here. I had coffee by that time. It was a Chemex of a sample roast I had done yesterday of Guatemala Acatenango Gesha. I had it next to the roaster while it was warming up for the day. It was nice.

As a personal coffee drinker, what is your coffee ritual like?

At work, it’s almost always as I just described and the consistency is nice. On the weekends, it varies, so much you might not call it a ritual. I’m usually trying to keep an eye on my 15 month old daughter, so brewing a cup can take up to a half hour. About half of the time, we’ll just go get it at a shop somewhere. I’m lucky enough to have made some very talented friends in some great shops around the city, so we get to visit and have great coffee.

I love that about New York. You can work in coffee and still see the value and pleasure of visiting other spaces and their expression of coffee. Can you define what exactly a coffee roaster is?

To me, a coffee roaster is simply the one at the helm of a single step of the coffee process—a step that I believe is very important, but no more so than any other. They are all dependent on each other.

I actually first applied for the Lead Barista position at Blue Bottle’s Berry Street cafe. I was sure I was going to get it. I didn’t.

Note: As this conversation will soon show, Justin’s ‘failing’ the job interview and getting the barista position, would turn into one big win.

But I think they liked me. They were looking to fill a roaster position and knew I had some experience: a recipe for my current situation. I thought I wanted to be back behind the bar, but after starting there as a roaster I realized that I love making coffee, but too much customer interaction can be a little draining.

Roasting different varieties of coffee from different regions can be very exciting. Generally my approach remains the same in that my goal is to reveal the character of origin. Character of origin being a culmination of how a given variety is grown, cared for, harvested and processed—among other things—in a given region.

All of these things will affect what flavors and attributes are inherent in the beans when they arrive. From there, I do my best to make sure that they can be represented in the cup. The roaster at Blue Bottle, image provided by Justin.

Failure is really winning in my opinion. It’s the road that gets us to where we are. Previous CreativeMorning/NewYork speakerSeth Godin says we should fail more. How does failure play into roasting?

I think I agree with you and Seth. I believe that we should fail more—only if we are going to learn from it.

I had a visit at the roastery today from a well-known coffee professional who I respect very much. We chatted as I roasted and he asked me about what I was doing. He began to point some things out about the current batch and offered up some advice that challenged some of my ideas. It took me a minute or two to realize that I had begun to reject some of his ideas just because they went against mine. Luckily, I was able to stop myself. We ended up having a great talk and I was able to learn a few things.

Wow! Here you are, in your field, but still malleable for adjustment. What a beautiful way to be living while on your coffee journey.

This isn’t the best example of a failure. However, failures can be hard to take and I think that sometimes it can be much easier to ignore or reject the conflicting ideas that they present. Indeed. Here’s my biggest question: the word “roast” is a maelstrom for so many thoughts and philosophies and beliefs about how a coffee should be cooked. Adjectives like light, medium and dark, are widely used to describe a coffee, but now we also have other ways of describing how a coffee has been roasted and what its flavor yields—terms that Blue Bottle uses from smoky, creamy, enveloping, viscous, jammy.. that give a consumer a more visual, tactile experience.

Can you speak to this naming process and its importance to a coffee drinker understanding what they might experience?

I think you’re right; there are so many opinions out there about the ‘right roast’ and I think it all depends on preference and/or intention.

This is something that I think about a lot. It’s something that I think is both valuable and exciting. For example, if I took the same coffee and roasted it the same way, say five times, to increasingly higher temperatures or degrees of roast, then tasted them, I’d be able to experience more of what that particular coffee is capable of. From there, it is a matter of preference and whichever roast degree is chosen to go forward with for that coffee would then be analyzed and assigned descriptors like the ones that you mentioned. Then those would be presented along with the coffee to whoever is drinking as somewhat of a guide for their experience.

How does creativity play a role in your process of roasting? Are there physical or environmental things that you tap into as you’re in the role of roaster?

Creativity plays the largest role, in my experience, when roasting new coffees in the process I mentioned before. After that, the aim is consistency.

As far as my physical environment goes, I don’t really listen to music while I roast as roasting requires most of my senses and attention. I prefer roasting very early in the morning and alone to really be able to dedicate all of my attention to my work. Creatives dream and imagine their projects having lives beyond them. I feel coffee is the same; it has a life beyond its processes, beyond the roaster. Do you have dreams for the coffees you roast?

I think about this a lot, too. I am very proud of my work and at Blue Bottle we spend a lot of time cupping every batch that we roast. Because of this, my relationship with any given coffee becomes very intimate and I am always discovering new things in coffees that I may not have picked up on before.

My hope is that any given customer has a good experience with the coffees that I roast; that they might taste what we have tasted and enjoy what we enjoy in it.

Lastly, summer is winding down, any suggestions for what’s in season now that a coffee drinker should explore or that they should look out for?

There are a lot of good Kenyan coffees right now. Gathithi AA from Koppi in Sweden, Miiri from Heart in Portland and the Mamuto AA from George Howell are a few of my favorites right now. There are also some great Central American coffees out right now, as well.

Costa Rica Santa Lucia roasted by Madcap in Grand Rapids and Costa Rica Magdalena by Square Mile in London are a couple that stand out for me.

It looks like we need to take a coffee road trip - Kenya, London, Costa Rica anyone? A note of special thanks to this month’s CreativeMornings/New York chapter coffee purveyor from Blue Bottle, our barista Michael Bewley for facilitating our time with Justin Rodriguez and Justin himself.