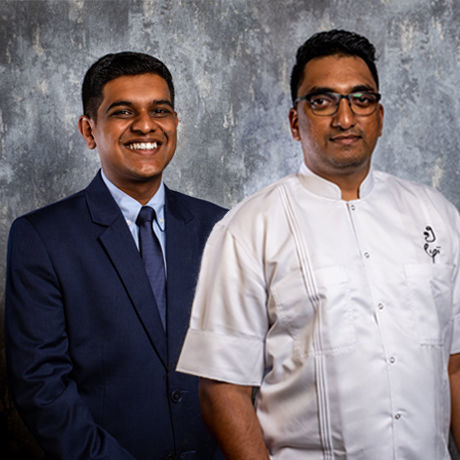 Varun Raj (Executive Chef) – Hailing from Bengaluru, Varun attended the MS Ramaiah College of Hotel Management to obtain his bachelor’s degree in Hotel Management. Varun has previously worked at Windmills Craftworks, Whitefield; Gaggan – Asia’s number 1 restaurant according to the Asias’s 50 Best list. A project very close to his heart was in Gokarna where he helped set up ‘Mantra Café’, the in-house restaurant at Zostel-Gokarna and made it one of the best restaurants in Gokarna. He now heads the kitchen at Lipi, his philosophy of mindful dining and an element of playfulness is reflected in the food at Lipi.

Madhusudhan Kashyap (Restaurateur) – Also from Bengaluru, Madhu attended the MS Ramaiah College of Hotel Management with Varun. Having graduated in 2016, Madhu moved to San Francisco, United States of America to work as a part of the front of house team at ‘Quince’, Chef Michael Tusk’s 3 Michelin Star Restaurant. Upon returning to India, Madhu spent 6 months at ‘Mantra Café’ in Gokarna. Madhu has a passion for wines and holds a level 3 certification in Wines and Spirits from the Wine and Spirits Education Trust, London. A Classicist at heart, he brings forth his love and passion for hospitality at Lipi.