An Unlikely Path to Creative Freedom

Why it’s most important to rebel against yourself

From a graphic design degree with a future career “half blind and plagued with carpal tunnel,” Ryan switched careers and jumped into a commercial kitchen with minimal experience. Years later, Please was created while recovering from surgery. “I fucked up a lot, I served a lot of shitty food… but I was cooking and I was figuring it out.” A culinary nomad, who came to Cincinnati with no desire to stay, Ryan talks about the importance of rebelling against yourself because you never know what curveball life will throw your way. 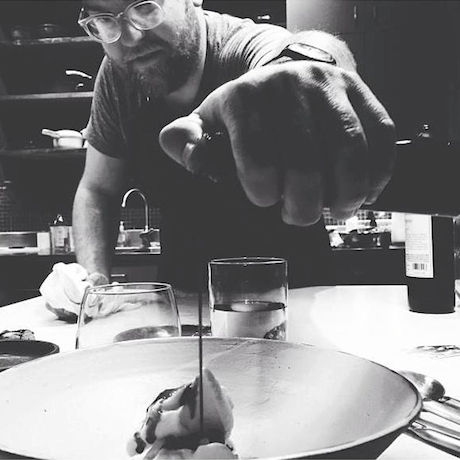 A graduate of the University of Cincinnati’s College of Design, Architecture, Art and Planning, Santos originally set out to be a graphic designer. But after moving back home to Cleveland after school and taking a job under Chef Nolan Konkoski at the French-inspired Tartine Bistro, Santos says he found a passion and wanted to do and learn “anything and everything” in the kitchen.

After two years at Tartine, he moved to Salt of the Earth in Pittsburgh, working under Chef Kevin Sousa, then traveled from L.A. to Virginia, working under various chefs he admired. After tiring of the nomadic lifestyle, he stopped in Cincinnati for a summer to try his hand at pop-up dinners under the Please moniker. He planned to move on again but, to his surprise, the dinners caught on and he’s been doing them for two years now.

But that’s not to say Santos doesn’t continue to travel and learn. His passion recently took him overseas to Belgium, where he was to intern at In De Wulf, a restaurant that Diners Club named one of the world’s 50 best. He brought back with him an appreciation for the approach to food at In De Wulf. Santos characterizes this approach as modern, creative and rustic — things important to him personally as a chef and which reinforced his belief that things must be kept “organic and simple.” (Bio thanks to CityBeat)