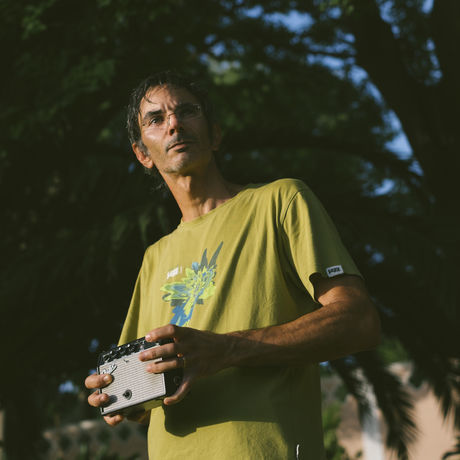 Rafael Toral is a music performer and composer who’s been deeply involved with Rock, Ambient, Contemporary, Electronic and Free Jazz music, in different periods of his life.

Working extensively with the electric guitar and electronics, he created a blend of ambient and rock and recorded albums like “Wave Field” or “Violence of Discovery and Calm of Acceptance”, regarded today as masterpieces in their genre. By the early 2000’s decided to start something new as radically different from the previous phase as possible, awakening to the idea that the world needed a different creative response. In 2004, as a transition from comfort to vulnerable action, he launched the “Space Program”, an ambitious long-term project exploring an approach to electronic music based on silence, through decision making and physical gesture, in a way inspired by post-free jazz.

The resulting music, “melodic without notes, rhythmic with no beat, familiar but strange, meticulous but radically free - riddled with paradox but full of clarity and space”, has been described as “a brand of electronic music far more visceral and emotive than that of his cerebral peers”.

In the last ten years he’s been thinking and practicing an understanding of silence as “space”, with a clear function in music creation but also as a metaphor for social relationships and a statement against information overload on any instance.

Performing solo or in numerous collaborations (among which Evan Parker, Sonic Youth, Jim O'Rourke, John Zorn, etc.), he has been touring the US, Europe and Japan. In 2014 he relocated to the mountains in central Portugal for a more sustainable life.

Impossible is a global product design company. We are a group of people who have come together to help solve meaningful problems and guide global change.

Second Home is a creative workspace and cultural venue, bringing together diverse industries, disciplines and types of social businesses.

Europastry is a family business founded in 1987 by visionary entrepreneur Pere Gallés, who saw frozen technology as a great business opportunity and a way to meet the needs of both everyday consumers and professionals from the baking and catering industries, offering innovative solutions and top quality products.