Prateek Sadhu puts foraged ingredients from all over India front and centre at his wilderness-to-table restaurant Masque. 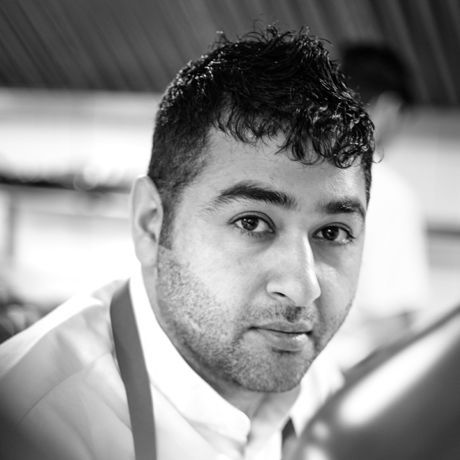 Born in Kashmir, Prateek Sadhu grew up around family farms and his naturally curious and driven personality led him to exploration in the kitchen by his tenth birthday. His mother and aunt taught him cooking basics, and a passion for food soon derailed his initial plans to become a commercial pilot. Instead, Prateek attended college for hotel management and began working in kitchens at Taj Hotels.

Prateek then went on to the Culinary Institute of America, graduating with double gold medals. He worked in some of the world’s finest kitchens including Alinea, The French Laundry, Bourbon Steak, Le Bernardin, and Michelin-starred restaurants across Europe. But it wasn’t until his tenure under Rene Redzepi at Noma in Copenhagen that Prateek developed a food philosophy of sourcing within the region, foraging for ‘lost’ ingredients, and harnessing the soil. Prateek has since manifested a style and technique which reflects a holistic, wilderness-to-table approach and commitment to bringing quality produce to the forefront of every dish he creates. A move back to India reconnected Prateek with Aditi Dugar, who shared his vision of using purely local ingredients to create seasonal and sustainable dishes. This ethos led the pair to travel the country in search of the best regional produce, specifically from the Himalayan belt, and create strong ties with local farmers. After nearly two years of research and development, they opened restaurant Masque in the heart of Mumbai in September 2016.

Masque has blazed its own trail through India’s culinary landscape, garnering a reputation for constant innovation and numerous accolades along the way. Its commitment to sustainability saw Masque ranked among the top 10 on Food Tank’s 2016 list of restaurant innovators in the world. That same year, Prateek was awarded most innovative chef of the year by the Western Culinary Association of India. In December 2017, he was named Chef of the Year at the Condé Nast Traveller Top Restaurant Awards.