Tackling the theme of Action, we got prolific slashie Oliver Driver to tell us all about his incredibly diverse, action-packed career.

The CreativeMornings community is all about doing. Making, learning, loving, innovating, creating, sharing, living — each its own form of action. Action manifests itself in practices like urban planning, interactive design, filmmaking, choreography, and on the list goes, ever inspiring us to get up and do something. 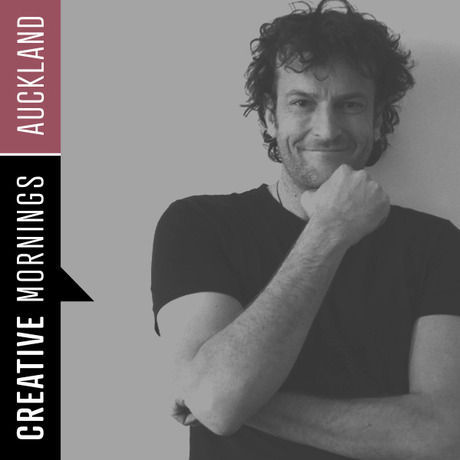 To say Actor/Director/Host/Writer/bar-owner Oliver Driver has his fingers in many pies is an understatement. Starting out in improv and film, Oliver gained awards and recognition through his television acting work on the shows ‘City Life’ and ‘Shortland Street’, while training as a theatre director. This training took him to the Auckland Theatre Company where he shouldered the role of Associate Director, and Acting Artistic Director. In his role as Associate Director he established a whole slew of innovative education and audience development programmes, striving to make the art form more accessible to the masses.

Oliver then went on to host current affairs arts show ‘Frontseat’ where for over eighty episodes he interviewed many of New Zealand’s leading artists and politicians around the country and overseas. He then went on to run the independent music channel ‘ALT TV’ before becoming the host of breakfast news show Sunrise and Newstalk ZB’s Sunday nights, all while continuing to both direct and star in a whole heap of theatre, tv and film productions, taking on hosting duties at almost every other Awards night in the country and writting a bunch of stuff for different publications.

Recently his focus has switched to television and he’s stepped into directing roles on old favourite ‘Shortland Street’, popular newbie ‘Step Dave’ and upcoming drama ‘Filthy Rich’. His most recent theatre work includes the critically acclaimed ‘Belleville’ for Silo Theatre and the sell out production of ‘Jesus Christ Superstar’ for Auckland Theatre Company. Not one to sit on his laurels, he’s also working on a couple of secret projects, a feature film and owns a bar called Harry. He is a proud member of Equity and a responsible dog owner.