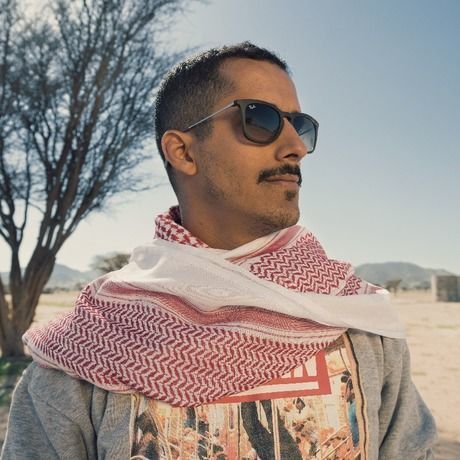 Born in Madina, Saudi Arabia in 1984, Moath Alofi is an artist, researcher, and explorer of the Madina Region. Currently, he is the Head of Cultural Programs at the Madina Development Authority. In addition to managing the Madina Arts Center, Moath is also the founder of artistic studio Al-Mthba, and the Co-Founder of Erth Team, a production group trained and specialized in safari trips, aerial photography, and travel documentation.

After obtaining his BA in Environmental Management and Sustainable Development from Bond University in Gold Coast, Australia, Moath returned to his hometown of Madina, only to experience a culture shock towards his own culture. The difficulty of adaptability inspired a need for creation, and so photography was his adjusting mechanism, an act of self-expression. Treating the holy city as both his studio and an open museum, Moath began a journey of photographic documentation in 2013. With a focus on cultural artifacts, heritage, and hidden treasures, Moath has since expanded to documenting and exploring the greater Madina Region, in both its barren and urbanized glories, and expresses interest in expanding his artistic explorations to the Kingdom of Saudi Arabia as a whole.