Incarcerated for nearly three decades, Mark Francis taught himself to make some of most intricate and evocative papier-mâché sculptures the world has seen, using only the crude materials and tools afforded to him in prison.

In 1986, Francis shot and killed a man during a botched robbery attempt. He was sentenced to twenty-five years to life for his crime. He began experimenting with sculpture in a prison art class. With no prior art experience, using toilet paper and paste made from boiled oatmeal or rice as his medium, Francis began to hone technical skills in papier-mâché. Over the proceeding decades, art became Mark’s form of psychotherapy, helping him deal with the pain and troubles of his early years—providing a purpose and voice. Through his art, Mark explored the social, emotional and psychological impacts of life in prison.

In this talk, Francis is joined by Mark Collinsworth of the Kentucky Folk Art center and Kentucky artist Bob Morgan. Together, they trace the evolution of Francis’ art, each piece a profound exploration of moments of hopelessness, introspection and discovery from his time in prison. 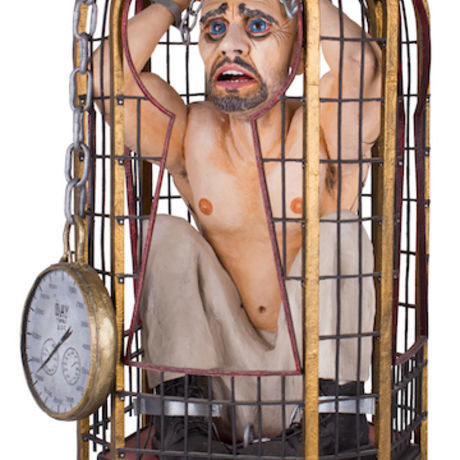 Mark Francis was born in Detroit in 1960, and he grew up in an abusive household near Hopkinsville, KY. As a young man, Francis served in the Navy and worked as a carpenter. However, he was unable to escape the trauma of his childhood, and by the mid 1980s, he had fallen into severe addiction. In 1986, Francis shot and killed a man during a botched robbery attempt. He was sentenced to twenty-five years to life for his crime.

Over more than two and a half decades of incarceration, Francis taught himself to make some of the most incredible papier-mâché sculptures that the world has ever seen. Using only those few materials available to him, he employed art to examine the social, emotional, and psychological impacts of life in prison.

He was released in 2014 and currently lives and works in central Tennessee. As a self-taught, incarcerated artist, Mark Francis’ accomplishments were unparalleled. But, perhaps more importantly, it was art that saved him in those dark hours. It was art that helped him deal with the pain and troubles of his early years. It was art that gave him a purpose and a voice. We are tremendously excited to see how he puts his keen eye and wonderful skills to use as he moves forward in a new life, in a new world, in a new century.