Blending a background in mathematics and over a decade of experience as a Washington Post photojournalist, Jahi urges us all to be “mathematicians of the spirit,” seeking understanding and equality in all aspects of life. 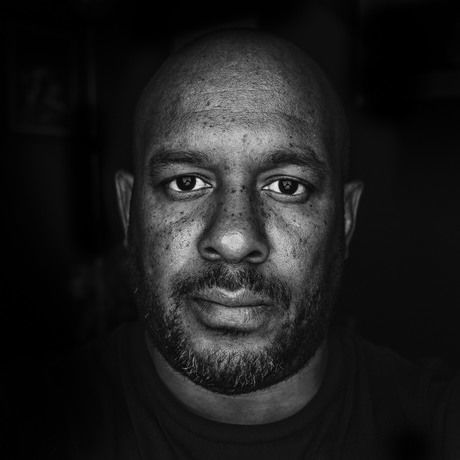 After earning his undergraduate degree in mathematics and a master’s degree in math education from the University of Kentucky, Jahi Chikwendiu spent a year teaching high school math with the idea to help youngsters more easily connect math to the world and universe around them. On the side, Chikwendiu studied other passions that included photography and photojournalism. Those “secondary” passions, and photo portfolio, led to a full-time staff photographer position at his hometown newspaper, the Lexington (KY) Herald-Leader. Three months later, the Kentucky News Photographer’s Association (KNPA) named Jahi the 1998 Photographer of the Year. After two years of covering the rich cultural landscape of Kentucky, he would join The Washington Post, where he’s been a staff photographer since January of 2001.

Since joining the Washington Post, Chikwendiu’s main base of coverage has been the DC area, but he has covered a wide range of stories that include DC’s broken school system and the 2003 US-led invasion of Iraq, AIDS and poverty in Kenya and genocide in Darfur, Sudanese refugees in Egypt, cluster bomb victims in South Lebanon, and the 2011 formation of the world’s newest country, South Sudan. Chikwendiu spent the first three months of 2009 in Africa covering the Barack Obama inauguration from the Kenyan home village of the former US president’s father as well as other social stories in the Democratic Republic of Congo, Rwanda, Kenya, and South Sudan. Since the 2014 fatal shooting of unarmed, Black teenager Michael Brown by Darren Wilson, a White police officer in Ferguson, Missouri, Chikwendiu has spent a significant amount of focus on the systemic issues of police abuse of power and the subsequent lack of accountability.

As a holder of a degree in mathematics, Chikwendiu has written a countless number of equal signs. So, at the mention of the word equality, his mind initially drifts to mathematical equations on paper before soon turning toward universal definitions of equality, from the human perspective.

Be a mathematician of the spirit. — Jahi Chikwendiu