Be brave: make your own happy ending

Starting from the classic film Breakfast at Tiffany’s, Irina was our storyteller, our guide in a journey of wonder through the world of Tiffany, Klimt, Audrey Hepburn, Hollywood and shared with us her wonderful passion for the world of cinema. 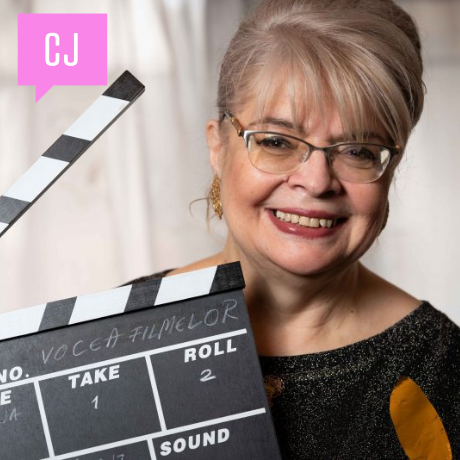 Irina Margareta Nistor is a legendary Romanian translator and film critic, whose voice is one of the most well-known in Romania for many generations because from 1985-1996 she secretly dubbed almost 5000 banned films on VHS taped smuggled in from the West (topic becoming a documentary by Ilinca Călugăreanu, selected for Sundance, in 2015: „Chuck Norris versus Communism”) - thus opening the doors of international cinema to all Romanians. Many even say that her voice is the most well known voice in Romania after Ceaușescu.

Born on March 26 1957, in Bucharest, Irina –Margareta Nistor graduated the University, as a BA, in 1980, French – English, with her final paper: „Cocteau and the Cinema Poetry”. The same year she started translating for the Romanian Film Library and the National Television, where she subtitled over 500 movies and produced film shows, such as:”Video-Guide”, “Series of the Series ”and “Screen”, „Film Puzzle” or „Cinema Lexicon”. She took interviews with great film makers and ambassadors. She commented live César Awards, Cannes Awards, Cristian Mungiu’s Palme d'Or as well as Oscars, BAFTA and EMMY Film, festivals in Karlovy Vary, Reims, Stockholm Montreux, comments on radio, TV and print media from Cannes, Berlin, Namur, Tokyo, San Sebastian, Chişinău, Montreal, London, Rome, Venice etc. Since 2012 she is the Director of The International Psychoanalysis and Film Festival in Bucharest, imported from London.