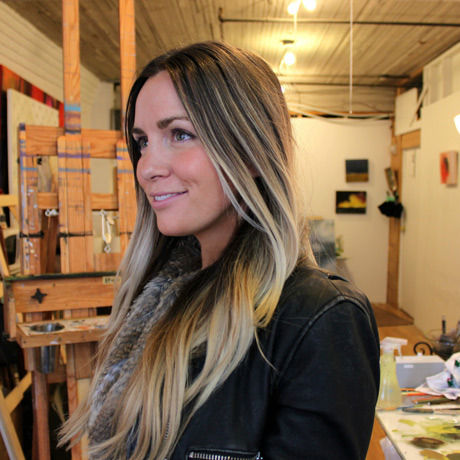 Erin Ross lives and works in Edmonton, with her studio located in the historic Great West Saddlery building on 104th street. She earned her Bachelor of Fine Arts from the University of Alberta in 2006, and studied Visual Communication Design at Medicine Hat College. Her work has been represented in commercial galleries since 2008 and belongs in many prominent private and public collections. Along with her commercial representation, Erin has shown work at the Art Gallery of Alberta, Latitude 53 contemporary Art Gallery, Harcourt House and has a solo show planned for the summer of 2015 at the Art Gallery of St. Albert.

Public attention for Erin’s work has included an award of excellence in Illustration from Communication Arts magazine, feature articles in Avenue Edmonton and SEE Magazine, a documentary segment on Alberta Primetime, and interviews with CBC Radio One, Profile magazine, and the Edmonton Journal. Erin was nominated as an Emerging Artist for the 25th and 26th Annual Mayor’s Celebration of the Arts Awards.