The joy of preserving proofs of reality

Starting from the classical and general meanings of preserve, Dorel Găină beautifully shifts towards one of his lifetime passions: photography He challenges the audience to see beyond the familiar meanings of preserve and also to see photography beyond its general perception and form, by exploring the directions and connections between preserve and photography. By sharing examples from his vast portfolio - or as he calls it “my logbook of the proofs of reality” - and examples from some of his students from the Art University in Cluj, Dorel Găina took us in a wonderful journey in the land of photography. 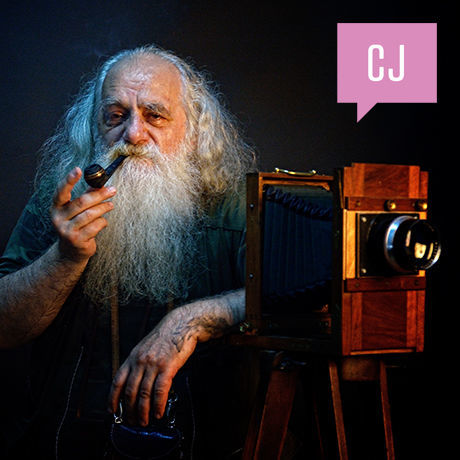 Nonconformist and experimentalist photographer and professor, bearing the image of a picturesque character, Dorel Găină is considered by many a living legend. And we are so honoured for accepting the invitation to explore together with us the global theme of Preserve. In the end, it is quite difficult to describe the wonderful Dorel Găină, so we will let you discover more about him in the short autobiographical essay “Anti-memoirs” written by him below:

I’ve been drawing since I was eight months old. Perhaps this magical and accidental or even gifted happening has paved my place in the world and the universe. Initially, of course I was drawing single, grouped, adjoined, intersected circles. The first figurative drawings emerged at the age of one, one and a half years old and they were attempts of visually representing planes, horse carriages, horses, dogs…and in the end people. In addition, at this stage there was an incursion into “politics”, more precisely by taking advantage of having access to some illustrated magazines from those times, especially the soviet magazine Oga(a)niok. I used to draw over pictures of the political leaders from that period, like Gheorghe Gheorghiu-Dej,Chivu Stoica and also pundits of the social-communist ideology like Marx, Engels, Lenin. I used to draw great donkey ears over their pictures, but due to the dangerous political environment we lived in those time, my parents had to take a difficult decision: to burn the magazines in secrecy or to keep them hidden from sight. Fortunately, they decided to keep these magazines hidden and even show them to me later when I was a teenager and the dangers of the political oppression were lessened. Beyond this episode of a pseudo and innocent dissidence, drawing continued to be my main daily partner, from the simple role of a journal to a journey between utopia and the interpretations of the imaginary. Even today I am drawing constantly even when I think rambling thoughts or thoughts with purpose and method. Over the years, other passions emerged – some being celebrated and/or honoured sporadically.

One of these countless passions is the one for photography – a passion that brings together under various conjugations and interpretations other passions of mine (the passion for exploring-questioning-discerning-representing visually from the obvious reality to incursions into imaginary declinations; the passion for poetry from the literary genre to the poetry of life and the poetry of revelation, of dreams and dreaming; the passion for philosophy and philosophizing; the passion for love as a reality, utopia and imaginary; the passion for melancholy, nostalgia, sleep, procrastination, delay, coffee, pipe, dogs, painting, graphics, design and its declinations; the passion for the other graphic arts media, old or new; the passion for friendships which are practiced and/or just placed on the shelf of passive and/or active memory). In the field of photography, I love, treasure and practice lots and lots of directions from the direct, analog (argentic) or digital, to the experimental and even its declinations, either of identity, or the ones connected with the artistic, cultural, social environments. I would mention that both in photography and in other visual arts media, I am not and do not consider myself to be an artist and/or an expert-professional, but just a lover, seized by love, by photography and the by the visual arts.

In conclusion of these succinct and sequential anti-memoirs, I have to confess that the amount of personal flaws surpasses a great deal the qualities, none of what is human is foreign to me, but in my own discreet and humble defense I also have the saying that “the one who never sinned should be the first to throw the rock”.