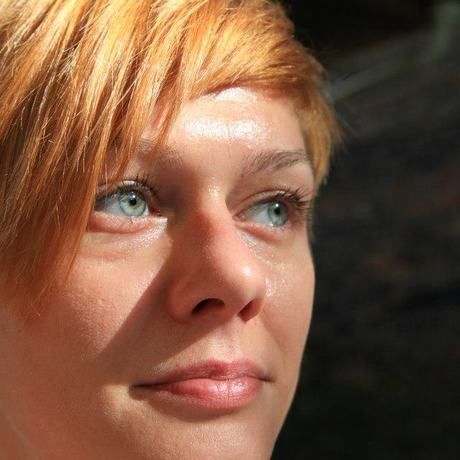 Cinty Ionescu is a Bucharest based artist with a constant interest in live video experimentation and interdisciplinary collaboration. She is committed to exploring new expression forms in the field of live performance, at the crossroads of visual arts and live music, of stage theater and digital theater, of installations and augmented reality. Described as a “hybrid artist that whirls with ease, conquering new territories, animated by the main engine of innovation in any field: curiosity” (Cristina Modreanu, theater critic), Cinty worked at over 30 theater plays and dance pieces and performed hundreds of live shows which include multiple collaborations with musicians. Cinty presented her shows, most of them with a live component, on numerous national stages and in international contexts. She was awarded in 2011 the Excellence Award for Outstanding Video Design at the FringeNYC.

In the past years Cinty initiated and coordinated several multimedia stage projects, directing, dramatizing and video-performing in shows like ROMANYEAH! (audio-video performance, ICRNY), Traces of Destruction on Mars (performative installation, Odeon Theatre in Bucharest) or embodied enescu mix (multimedia dance performance, ArtistNe(s)t and the National Museum George Enescu). In Between Two Pills is her most recent creation, a theatrical play that blends dramatizations of real stories about depression, as seen (or hidden) in Bucharest in 2016, with moments shot and lived by the artist in the hospital and with live new media elements: sound & video design and augmented reality, used for the first time in Romania in a theatrical performance.

Since 2015 Cinty is an MA in Digital Technologies in the Contemporary Performance at the National University of Theatre and Cinematography (UNATC) in Bucharest. Her focus for the upcoming projects is to continue to look at performance as a design, delving into mediaturgy by experimenting new tools and methods of embedding media in the narrative through digital technologies that explore live presence and mediated presence.