See for yourself
All Talks Individuals Chapters
blog
Blog chi 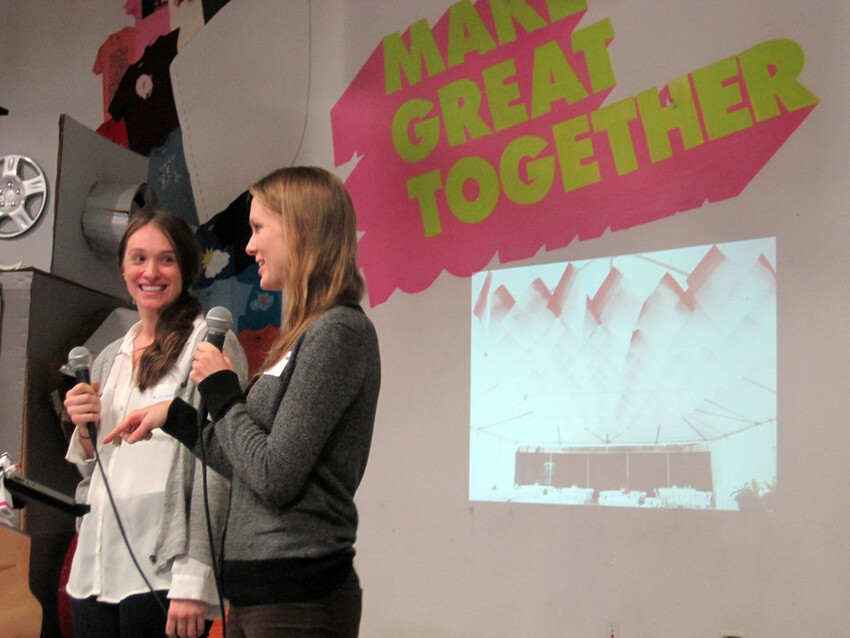 INDO: Reclaiming possibility and reflecting it

December 2013: The twelfth and last Chicago CreativeMornings gathering featured Linsey Burritt (left) and Crystal Grover (right), who founded INDO(1), “a Chicago-based design and fabrications firm specializing in site-specific installations created with materials diverted from the waste and recycling streams.” Their Talk was held at Threadless(2).

CreativeMornings’ December 2013 global theme was Make. By creating site-specific work—from window displays to art installations to interiors to objects to photoshoots—INDO also states a point of view that significantly conveys the attitude and act of reclamation.

“We use all types of materials.”

INDO’s presentation also connected with my interview with Artist-Maker Nic Webb, who scouts the British Isles to collect wood from felled trees. To him, this isn’t dead wood, it’s wood with potential. Nic uses this found—and respected—material to carve beautiful spoons, which he described as “humble objects that serve us every day.” From nature to table.

At the One Of A Kind Show and Sale 2013 in Chicago, I was delighted to meet Katie and Joseph Thompson of Joseph Thompson Woodworks in Charleston, South Carolina. Joseph’s stories behind his and wife’s “all things wood” display of objects—from chairs to candle holders to coasters—turned our in-person meeting into a fireside chat. One story he shared was finding sunken wood closeby their studio, recovering it, and turning it into a unique array of wall pieces.

To INDO, reclaiming used, even trashed, materials, redefines the meaning and sentiment of “lost treasures”.

“Relationships with the recycling community led to discoveries for our materials.”

INDO’s work of peering beyond the surface of used materials for reuse in their projects also speaks to a greater phenomenon: Relationships. Over time, INDO has assembled a network of connections to locate the artificial ingredients desired for their projects. Two hundred sheets of polypropylene were sourced from a local recycling company for the Chef du Jour space at the Taste of Chicago. Scrap wood was sourced from the Peggy Notebaert Nature Museum for the cover photography of Timeout Spring 2013 Fashion magazine.

In the December 2013/January 2014 issue, with the headline “Prefab Now”, of Dwell, textile designer Eleanor Pritchard, whose studio is based in London, emphasized the importance of relationships of regional mills—in Lancashire, Wales, Scotland—to provide her with fabrics and production of her blankets, among other textile goods:

“I’m interested in being hands-on with the manufacturing and not just designing and getting a royalty. Everyone says there’s no industry left in the country, but these small mills—in the farthest corners, that have been going on forever—were a world of excitement for me to discover.” INDO similarly discovers and reaches out to material providers. It’s a sensibility to seek and intersect with (to borrow a concept in physics) the “world lines” of entities and materials, so a reciprocal relationship can be forged. In INDO’s case, their reliance on a network of material channels is integral to their process and their mission of sustainability, which is about relationships—a critical reality that Linsey and Crystal bravely(3) and gracefully demonstrate as essential to their business.

“Reflect on your process. Reflect on what you are doing.”

The philosopher Socrates claimed that “the unexamined life is not worth living.” INDO’s call to reflect was a reminder, never worn in relevance: To carve out moments out of the pace and viscosity of the day in order to let go, decompress, and later join the workflow, this time, after a necessary spike of self-massage. To put a Socratic twist on INDO’s practice of reflection: The unexamined process is not worth pursuing.

Identify areas to reclaim. Kindle connections toward the quality of relationships. Make time to pause and reflect.

(1) I discovered INDO upon watching an ABC-network story via a local-news service installed in a cab toward the airport, for a trip to Boston.

(2) Read my recap and view photos of Chicago CreativeMornings #4, which was also held at Threadless, featuring a Talk by its co-founder Jake Nickell.

(3) Bravery was the CreativeMornings global theme of November 2013.