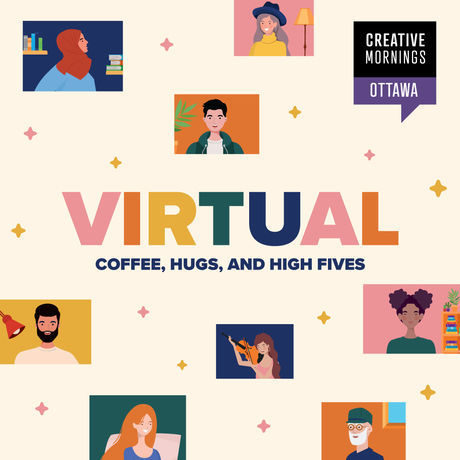 Join us for digital hugs and high-fives, chats and music at our first virtual CreativeMornings Ottawa event!

It’s with heavy hearts that our team had to cancel the in-person portion of our events, but that doesn’t mean we cannot continue to connect!

Tune in from your couch with a cup o’ joe to enjoy music from Canadian singer-songwriter and Juno & Polaris Music Prize nominee, Kalle Mattson, have a group conversation, get some face-time with other local creatives and hear from our audience on our virtual stage!

This will be our first time hosting a virtual event, so be patient with us. We are going to try and make it as CreativeMornings Ottawa as possible… just with digital hugs and high fives.

Register as usual, and we will email all attendees with details about how to join virtually before the event.

8:30-9:00 a.m.  Sign-on, grab a coffee and get comfy. Feel free to introduce yourself in the chat!
9:00 a.m.   Welcome and intro by our hosts.
9:10 a.m. Performance by Canadian singer-songwriter Kalle Mattson!
9:15 a.m.Guided small group discussions on creativity and Ottawa.
9:40 a.m. We’ll meet back up in the main event room to share outcomes.
How to participate: If you want to share what your breakout group discussed with the larger group, use the “raise hand” feature in the chat, you will then be unmuted and invited to speak! Agree with something? Use the “thumbs up” feature in the chat.
9:45 a.m. Group Stretch lead by Spinco Ottawa instructor Caitlin Teed!
9:50 a.m. Audience takes the stage! Have any thoughts? Know of any virtual events, workouts, creative solutions or classes? Share with us! Use the “raise hand” feature to be selected to speak. To ensure we can get as many people as possible please keep it to 30 seconds max.
9:57 a.m. “ONE LAST SONG” by Kalle Mattson!
10:00 a.m. Closing. Feel free to stick around and chat with others or collaborate on our virtual mural!

Banfield is an independent mid-size agency based in Canada’s capital. Since 1973, we’ve thrived in a fast-changing industry by putting people at the heart of everything we do — from the relationships we build with our local, national, and global clients, to the agile solutions and stories we create to connect with their audiences.

Rebel.com believes in keeping the internet human. That’s why everything they do is backed by kick-ass, award-winning, 24/7 customer support and a passionate community of people that are working to make the world a better place, one website at a time. Whether you’re looking for web hosting, web design, or a great domain name, Rebel.com has all the tools you need to get online.

Brown Bag Coffee Roasters is a small (some would say micro) family run roasting company located in the foothills of Gatineau, Quebec. As artisan style coffee roasters, they use fluid bed technology, and focus on single origin beans.They are proudly bringing hand crafted coffee to CreativeMornings Ottawa, as our official 2020 Coffee Partner. Found out more about them here.

Ottawa connects you with the people, places and stories that make up your day. The CBC Ottawa team brings the latest local news on radio, TV and online from out in the community and in the studio.

Since 2009 he has released four full-length albums & two EPs to critical & commercial acclaim. His first music video for “Thick As Thieves” gained over 1,000,000 views & was covered by Time Magazine, NPR & The Huffington Post. It was followed in 2014 by Mattson’s third full-length studio album, the Polaris Music Prize-nominated “Someday, The Moon Will Be Gold”, which was inspired by his hometown on the Canadian/U.S. border and the death of his mother five years prior. It received glowing reviews from Pitchfork, Pop Matters, Rolling Stone, & Exclaim called it - “simply, a benchmark in fearless songwriting.” It was promoted by multiple tours across Canada, the US & Europe. August 2015 saw the release of a new EP, “Avalanche”, which Mattson described as a mini-LP concerning the twenty-something miasma of “anxiety, nostalgia, the past, the future.” The music video for “Avalanche” received widespread media attention & was nominated for a 2016 Juno Award, a 2016 Much Music Video Award & won the 2016 Prism Prize. On his newest album, 2018’s “Youth.”, Mattson set out to make a coming-of-age album about the in-between days of post-adolescence and pre-adulthood. It was released to rave reviews with Dominionated saying - “file it under instant classic.”