Gerry Seavo James How can I support nature? 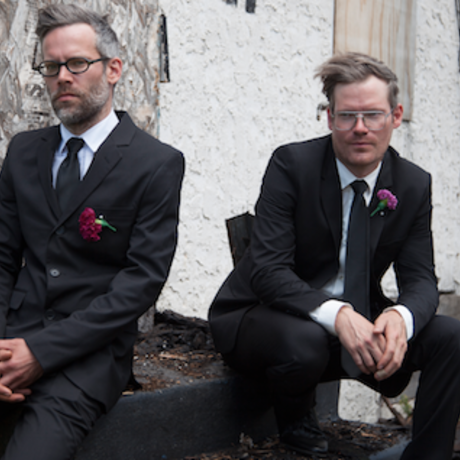 Steven and Billy Dufala are a multidisciplinary practice whose primary concern is the collaborative creation of new work in a variety of media. Moving freely between disciplines, the brothers have created drawings, prints, sculpture, performance, music and design. Their site specific and installation work combines their sometimes disparate individual interests, and engages directly with their own community of artists and makers in Philadelphia, the city in which they live and work, but also the city more broadly. Always anxious to break new ground and forge new relationships, they believe that this type of engagement yields a solid base on which the difficult and divisive issues of our time may be addressed, if not resolved.

With an understanding that conjecture is likely a more accessible, and so productive, position than any single answer, their work eschews practical reason for sake of an inspired, if sometimes irreverent, take on our concumer culture, waste, recycling, violence and humor.

From their early experience interacting with the public in the now infamous toilet tricycle race, to the direct community engagement of funeral for a home, the Dufala brothers assume creative life extends beyond the making of objects. They are as interested in the experience of these things, the possession of a perspective, as they are in objects; theirs is a practice focused on assessments, questions, and perspectives, with the work they produce reflecting in equal measure a fascination with the stuff of our contemporary lives, and the impact we have on our communities, our planet, and our culture.

Billy is a co-founder RAIR, an artist residency located at Revolution Recovery, a construction and demolition waste recycling facility in northeast Philadelphia. Steven is a set designer, and has worked with many theater artists in philadelphia and new york city. Both brothers have been members of the band Man Man, of which Steven is a founding member.

If you look at the surface of something and it's ugly, look a little closer and investigate a little more and there's probably more to it. — Dufala Brothers