See how the photographer Simon Gallus scans people and locations with a 16 feet tripod crane. 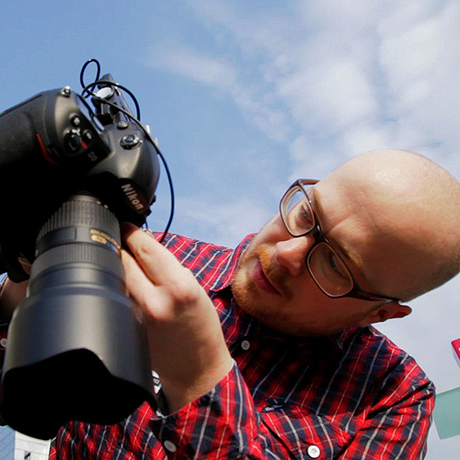 Growing up in a family of photographers in Biberach an der Riss, Simon Gallus studied photo design and graphic design in Dortmund after completing his training as a photographer.

Since 1996 Simon has worked as a freelance photographer. From 2001 to 2005 Simon was Partner and Managing Director of Corporate Design Agency Fons Hickmann m23 in Berlin. Since 2006 he is running his own Communication Design Agency 2einhalb in Berlin and Biberach. Simon Gallus has won several international design awards.

Simon Gallus shows places, squares, houses, rooms where people are always the central point of the scene. All that we see almost from the divine perspective: from above. A surprising look that can be achieved, at least for humans, just using the tools of digital technology. The scenes were scanned with a digital camera and then put together on the computer. Thus the impression of a representational snapshot is misleading but we get a new view on things.

With the graphical perspective, the view from above, the reduction of three-dimensional scenes on surfaces Simon Gallus irritates not only as a photographer but also as a graphic artist.