Rick Griffith talks about the education system and how to transform it using communities and ice cream.

Rick Griffith has achieved much in the past 2 decades including completely an award-winning publication for the 2008 Democratic National Convention, being named a City and County of Denver Cultural Commissioner, and gaining membership to the International Academy of Digital Arts and Sciences. And yet throughout his career Rick has been steadfastly committed to teaching new generations of artists and designers. His desire to help growing designers has led him to teach graphic design and typography at the University of Colorado, Denver, Rocky Mountain College of Art + Design, and University of Denver. His innovative teaching methods make him a frequent guest lecturer to other educators.

For our final CreativeMornings of 2014, Rick will talk with us about his experiences both as a designer and as an educator, and ponder what the future of education looks like for Creatives in Denver. 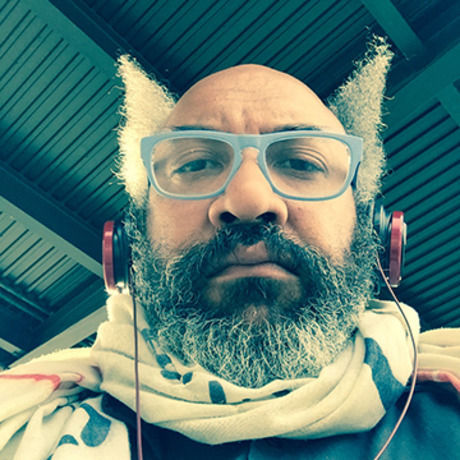 For 21 years Rick Griffith has sought clarity about art and communication through the broad discipline of design. His work is included in the AIGA National Design Archives, the Denver Art Museum’s Design permanent collection, The Butler Library of Rare Books and Manuscripts at Columbia University, and the Tweed Museum of Art at the University of Minnesota, Duluth. He has works published by Rotovision in the UK, Lawrence King, and Rockport in the US.

Rick’s award winning work for the Democratic National Convention in 2008 was published in the book ‘Art for Obama, Designing Manifest Hope and the Campaign for Change’ published by Gingko Press. His devotion to letters has lead him to teach graphic design and typography for the University of Colorado, Denver, The Rocky Mountain College of Art + Design, and most recently, The University of Denver. He serves as lecturer and panelist for conferences and presents frequently on either his method for teaching and practicing as a designer/typographer or the model of professional practice, leadership, and constant experimentation of the studio and type laboratory called MATTER.

The reason why it’s [education] so important is because it’s a fight for what young people will think. It’s what young people should know, what all people might posses in information or knowledge in order to communicate with each other and even other cultures… It’s also a battlefield for the kind of place that you would live it, it would define the people around you and it would also define the education level of people who vote in a democracy. — Rick Griffith

Education, and in particular learning, is like one of these wonderful self-fulfilling prophecies. As soon as you can articulate what you want to know, it is there for your grasp. — Rick Griffith