Meltem Arikan talks about her version of reality 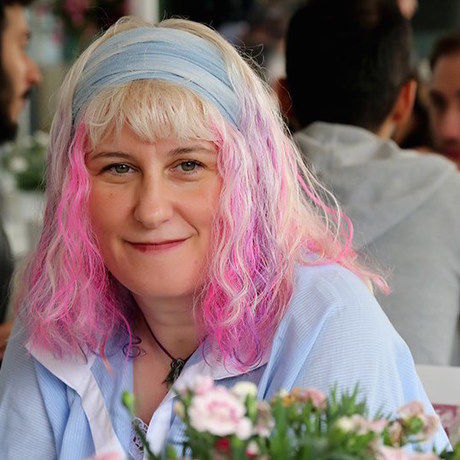 Turkish author and playwright Arikan, is well known for her fearless, outspoken voice and her critique of society in her many novels, plays, poems and articles. Her first short stories and essays were published by various literary journals in the early nineties and her fourth novel Stop Hurting My Flesh was banned in early 2004 by the Committee to Protect Minors from Obscene Publications. She fought to have the ban lifted and has since been awarded with the Freedom of Thought and Speech Award 2004 by the Turkish Publishers’ Association.

Arikan has written 8 novels, 1 book of research and 3 plays. She’s received several awards and was short-listed for the Freedom of Expression Award in 2014 by Index on Censorship for her play ‘Mi Minor’ which the Turkish authorities claimed was a rehearsal for the Gezi Park demonstrations in 2013. Their subsequent hate campaign, fuelled by state sponsored media, forced her to leave Turkey to start living in Wales.

Since 2011, Arikan’s articles on the changing digital world, censorship, women’s rights and child abuse are frequently published across the globe by websites including News Junkie Post and Index on Censorship.

A celebrated photographer Meltem has started to incorporate her writings into her visual work creating a unique technique of manipulating images. We will be hearing all about Meltem’s incredible life, creative processes and why she has chosen to dedicate her life to fighting prejudice, for freedom of speech and encouraging others to question common notions of reality.

Creatives and artists should create without worrying about what reality is. — Meltem Arikan

We can actually create every moment of our lives, if we stop taking people and their judgments so seriously. — Meltem Arikan

We should think freely by breaking the imposed thought patterns. — Meltem Arikan

People are afraid of nakedness because nakedness means transparency which is why societies seek to cover up. — Meltem Arikan

We construct the reality according to our own perception and feelings. — Meltem Arikan