Rashayla Marie Brown challenges us to think about our actions, assumptions and perspectives.

This month’s theme is Shock, and performance artist Rashayla Marie Brown, does just that by giving us access into her personal life and creative work. 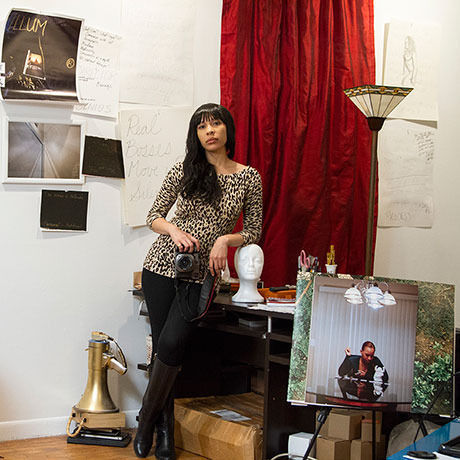 A lifelong nomad who has moved 24 times, artist/scholar Rashayla Marie Brown manages a living studio practice across an extensive list of cultural production modes. Exploiting the role of the artist as both an agent and an object of desire, her work spans photographic and video-based image-making; performance and social engagement/disruption; curation and installation; and theoretical writings infused with autobiography, subjectivity, and spirituality. Her journey as a professional artist began as a radio DJ performing research in London, England and as founder of the family-owned design company Selah Vibe, Inc. in Atlanta, GA. Brown currently serves as the inaugural Director of Student Affairs for Diversity and Inclusion at the School of the Art Institute of Chicago (SAIC), fostering queer Afrofeminist narratives across institutions.

Brown holds a BA in Sociology and African-American Studies from Yale University, advised by Paul Gilroy, and a BFA from SAIC, advised by Barbara DeGenevieve. Her work has been commissioned by the Museum of Contemporary Art, Chicago; Museum of Contemporary Photography, Chicago; University of Chicago; and Yale University; among others. Her work has also been featured at the Gene Siskel Film Center, Chicago, IL; Calumet Gallery, New York, NY; Center for Sex and Culture, San Francisco, CA; Centro Cultural Costaricense Norteamericano, San Jose, Costa Rica; and other venues. She has received numerous awards, including the Anna Louise Raymond Fellowship, Chicago Artist Coalition’s BOLT Residency, the Propeller Fund, and the Yale Mellon Research Grant.

Most recently Brown was named one of Newcity’s Breakout Artists 2015: Chicago’s Next Generation of Image Makers and her work was featured on the cover of the Chicago Reader.