And how do you cope? Interactive morning talk with four returning speakers. 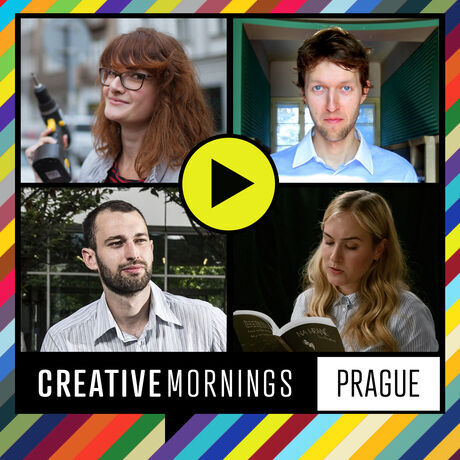 This time we decided to be radically different in our form and we decided to bring you not one, two or three, but four speakers! The speakers (introduced below) already honoured us with their talks during our previous mornings and we are curious to know how they are doing now during these turbulent times.

Zuzana Kuberová - the founder of the project called “Z pokoje do pokoje” and one of the three girls behind it. Their aim is to save old furniture from being thrown away by renovating it themselves and giving it a brand new life. Apart from a selling the re-made pieces, they also opened their workshop to the public and use it as a re-use center. Anyone can come, borrow tools and work on their personal projects.

Bára Vencálková – a young author and poet. She graduated from history and now continues studying philosophy at the Faculty of Arts of Charles University in Prague. She strives to understand things so she could help others find understanding as well. First and foremost, she is not a woman, but a person and like every person she wants to feel alive. She likes to think, read, run, draw, sing, and most of all, she does what she has always been doing. She writes.

Sebastian James - a Czech psychologist and licensed psychotherapist. In both life and work, he believes in openness, the ability to sense one’s own body, being able to play and being ready to help others. These are also the principles, that his workshops are based on, focusing on long-lasting personal relationships and sustainable happiness in life. His theory of “Radical Honesty” is an answer to a common reality of pretending, which also offers healthier and more entertaining way of life, as Sebastian says. He leads adventure workshops, individual and couple psychotherapy or communication and leadership trainings in the corporate environment.

Richard Vrdlovec - first started doing yoga back when he was 10 years old. Then he returned to it with a higher intensity around 2004, while he was working for prestigious consultancy companies and feeling generally stressed. Since that time, he has studied various yoga theories and practices and got inspired by teaching yoga himself. After 2011 he persisted with Buddha’s meditation tradition and in 2016 opened his own studio Yoga Karlín. Together with other experienced instructors, Richard teaches a variety of yoga styles and meditation basics there.