Sam Soffes I Believe You Can Do Anything 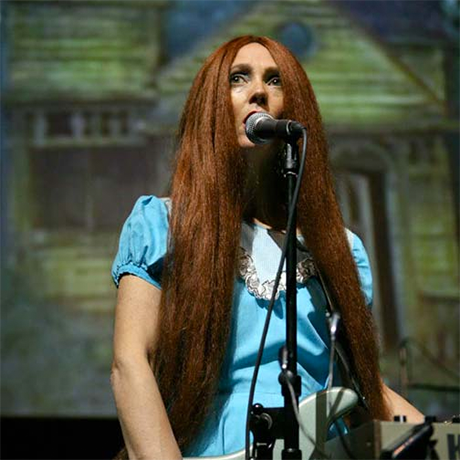 Marnie Weber’s multidisciplinary practice encompasses performance, film, video, sculpture, collage, music and costuming. By combining her own mythology of creatures, monsters, animals and female characters with costuming on film and stage sets; she creates her own fictional narratives of passion, transformation, and discovery. Weber creates uncanny worlds that exist in a realm between fantasy and reality, and invites viewers into an exploration of the subconscious. Using fairytale-like imagery, she places women in positions of power and primacy creating a backdrop as a site of transformation and magic. Weber’s early years were grounded in performance art, before moving into filmmaking and later large-scale installations, all the while continuing a practice of making collages, music, and limited edition records as an art form. All of these mediums carry a homemade, intentionally naïve aesthetic that continues throughout her work.

She has had solo shows, video screenings and performances throughout the U.S., Asia and Europe, and has had a retrospective of her work at Magasin in Grenoble France. Upcoming exhibitions include a large-scale installation at Mattress Factory, Pittsburg this summer, a video screening at the Mykinos Biennial, as well as a survey exhibition at MAMCO (Musée d'art moderne et contemporain, Geneva).

I've begun to look at my life as a body of work, rather than what I'm doing right now. — Marnie Weber