Creativity, Art and the History of (in)equality 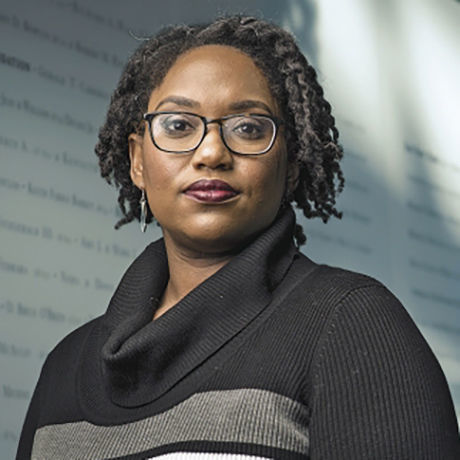 Marcia Chatelain is Associate Professor of History and African American Studies at Georgetown University. The author of South Side Girls: Growing up in the Great Migration (Duke University Press, 2015), Chatelain is a scholar of African American life and culture. In 2014, Chatelain organized her fellow scholars in a social media response to the crisis in Ferguson, Missouri, entitled #FergusonSyllabus. #FergusonSyllabus has led to similar initiatives online and has shaped curricular projects in K-12 settings, as well as academia. A frequent public speaker and consultant to educational institutions, Chatelain delivers lectures and workshops on inclusive teaching, social movements, and food justice.

Chatelain has contributed to TheAtlantic.com, Time.com, Ms. Magazine, and The Chronicle of Higher Education, and she has also been quoted in articles in the New York Times, the Chicago Tribune, the Washington Post, and the Chronicle of Higher Education; she has appeared on local television and national outlets including C-SPAN, MSNBC, CNN, BBC-America, and PBS. Chatelain hosts “Office Hours: A Podcast,” in which she talks to millennials about what is most important to them. Chatelain is a proud graduate of the University of Missouri-Columbia, where she was a Harry S. Truman Scholar, and she holds a Ph.D. in American Civilization from Brown University. In 2016, Chatelain was named a “Top Influencer in Higher Education,” by The Chronicle of Higher Education. he is currently the Eric and Wendy Schmidt Fellow at the New America Foundation. In 2017, she joined the team of “Undisclosed,” a podcast featuring a 16-episode arc about the death of Freddie Gray in Baltimore in 2015. During the 2017-2018 academic year, Chatelain will be on leave from Georgetown as a National Endowment for the Humanities Fellow to work on her next book about fast food and civil rights. She has won multiple teaching awards at Georgetown.

Is history the change over time or the continuity in light of our ideas of progress? — Marcia Chatelain

The story of Freddie Gray did not begin in April of 2015, it began in 1864 in the state of Maryland with the struggle against slavery. — Marcia Chatelain

Twitter is an effective way of taking the temperature of a lot educators at the same time. — Marcia Chatelain

We started to imagine a way in which the history of slavery could inform our goals as a university rather than sit within our archive as a university. — Marcia Chatelain

I'm not creative, but I have a vision for the world I want to help create. — Marcia Chatelain