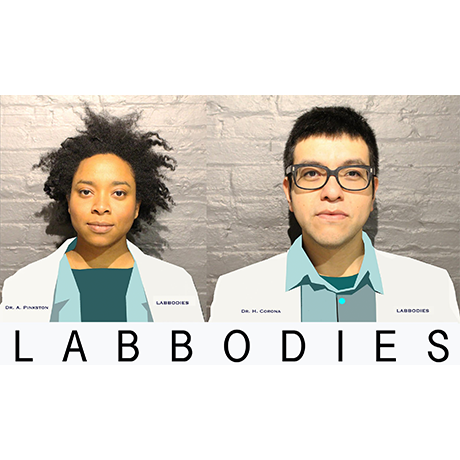 Labbodies is a nomadic performance art laboratory based in Baltimore, MD and is under the direction of Dr. H. Corona and Dr. A. Pinkston. Labbodies creates opportunities for performance artists to exhibit their work. The vision of Labbodies is to establish Baltimore as an international performance art hub through a series of weekly, monthly and annual performance art programs and festivals. They envision a Baltimore where performance artists live, work and thrive with the assistance of fellowships, project grants, residencies, travel awards, and exhibition production that supports the needs of live art. Labbodies has been commissioned by The Baltimore Museum of Art (2014), The Baltimore Office of Promotion and the Arts (2016), Artscape (2015,2016), Light City (2016), Station North Arts and Entertainment District (2016), and the Bromo Arts and Entertainment District (2014) to create their signature interactive events. Labbodies was named an “artist to watch” by Baltimore Magazine (2016) and Baltimore Style (2015), and “best mad scientists” by City Paper. They are the recipients of a Light City Artist Residency Winter 2016 in Baltimore’s Station North and a Force: Upsetting Rape Culture Pelham Printmaking Residency in 2015. www.labbodies.com

Ada Pinkston is a multimedia artist, educator, and organizer living and working in Baltimore, Maryland. Born in New York, her art explores the intersection of imagined histories and sociopolitical realities on our bodies using monoprint, performance, experimental video, and collage techniques. Inter-subjective exchange is also the primary substrate of her work. Her work has been featured in Transmodern Performance Festival, P.S.1, and the streets of Berlin. A recipient of a Mississippi State Arts Council Grant, Blaunstein Scholarship, and Michael Mazur Printmaking Scholarship, her most recent collaborative project includes founding the LabBodies Performance Art Laboratory in Baltimore Maryland. www.adapinkston.com

Hoesy Corona (b.1986 Mexico, based in Baltimore, MD) is a multidisciplinary artist and founding co-director of Labbodies, a performance art laboratory in Baltimore Maryland. Corona’s unapologetically colorful, sculptural and performance based works have been deeply influenced by his queer immigrant experience in the United States. Additionally, formative encounters with racism, discrimination, xenophobia and otherness have shaped the ways in which Corona creatively interprets the contemporary world around him, in new and compelling ways. His work has appeared at The Baltimore Museum of Art, VisArts, Washington Project for the Arts, and The Brooklyn International Performance Art Festival among others. He was the recipient of a Light City Artist in Residence Winter 2016 in Baltimore’s Station North and was the Cafe Con Leche Latino Artist Resident Artist at Pittsburgh’s Most Wanted Fine Art Gallery in May 2016. Corona is the recipient of a MSAC Individual Artist Award, a Force Pelham Printmaking Residency and was included in Creative Capital’s “On Our Radar 2016”. www.hoesycorona.com