Kristoffer’s cage wasn’t rattled as he talks inclusion at this month’s event.

Find out how a simple cookie brought a population of outsiders together when we talk INCLUSION. The best companies that drive the most value are inclusive by providing access. Bill Gates made computers affordable. Apple made tech easy for non-tech savvy individuals. Grant Cardone and Gary Vaynerchuk provide access to expert sales strategy and hustle via social media. Instagram allows anyone to create great photography and share them. Tesla provides access to more cities. Nui is providing access to sweets to people who need or want to cut out sugar and carbs but don’t want to feel left out. Customers take our cookies to weddings when they can’t eat cake. They take our cookies to the movies so they stay away from the candy. They put them in their type one diabetic children’s lunch boxes so those children feel normal. Inclusion is powerful. 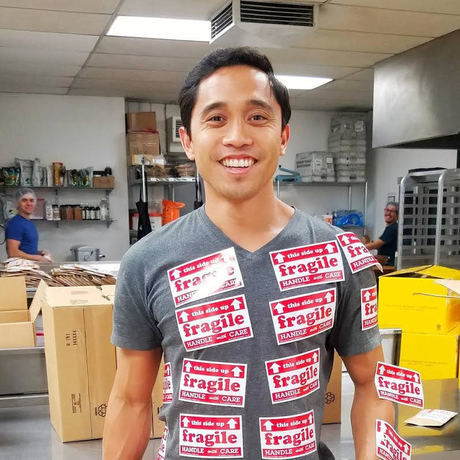 Orange County native Kristoffer Quiaoit is the founder and CEO of Nui Foods.  In 2016, he gave up sugar and carbs but struggled with sweet cravings.  So Kristoffer and a friend borrowed his mom’s kitchen and created the world’s first keto cookie.  That fun project became a mission to help people cut out sugar and live healthier lives.  In less than three years, Nui has grown to over 100,000 social media followers and has generated 6 figure annual revenue.  Kristoffer was recently featured on Shark Tank Season 10 and got offers from Kevin O'Leary, Barbara Corcoran, and Alex Rodriguez. He loves playing basketball and has a goal to read over 52 books in 2019.