The Magical Journey of a Blind Magician in NYC

How to be a walking contradiction and use perceived disadvantages as advantages.

Your reality is malleable. Our beliefs and narrative shapes what we see, how we see it, and how we engage with it.

For Justin Sight, being diagnosed legally blind without corrective treatment at age 10 couldn’t stop him from pursuing his dreams in performance and magic. A Polish immigrant turned New Yorker, Justin tells his story of how he uses these perceived “disadvantages” into advantages that allows him to perform unique magical acts. 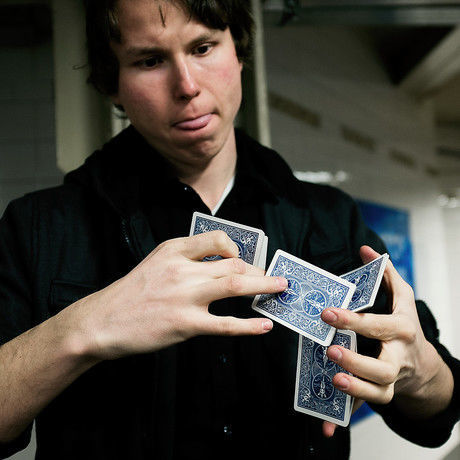 Justin Sight is a unique magician currently residing in New York City. Since the latter half of 2013, he has done events for companies and organizations such as Tumblr, Gawker, The Blue School and The United Nations. Most recently he was featured in the New York Post, Gothamist, The Atlantic, the UK DailyMail and countless other news and media outlets along with both national and international news programs.

Justin was diagnosed legally blind without corrective treatment at age 10. Around the same time, he developed a fascination for the modern day art of magic and performance. His unique brand of presentation often focuses on the notion of a “malleable reality” in which anything can happen. He demonstrates the “advantages” of his visual impairment by implementing ways to “see what others can’t”. He draws from a continuing involvement in the world’s mystical and esoteric traditions as well as modern scientific discoveries that point to the Mystery of What Is.

In the last two years, Justin has met and performed for various celebrities including Harvey Keitel, Chris Pratt. Hilton Valentine (The Animals), James Valentine (Maroon 5), David Blaine, Joe Franklin and professional athletes Kobayashi and the entire Milwaukee Brewers Major League Baseball team. He has performed multiple times at the prestigious Players Club in New York City and for several members of the cast and crew of Saturday Night Live.

This event will be livestreamed! Tune in on Friday morning and watch us live on Facebook at 8 AM!