See for yourself
All Talks Individuals Chapters
phl

part of a series on Mystery 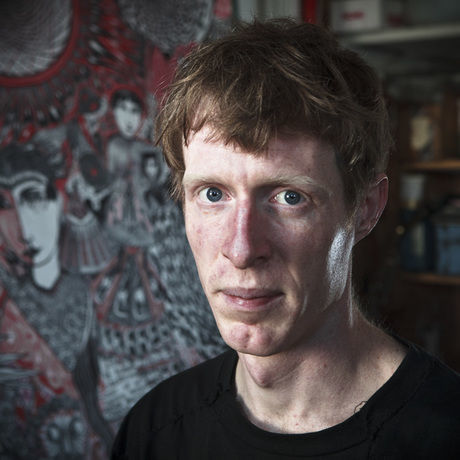 Justin Duerr was born in 1976, and grew up in rural Pennsylvania. As a child he studied ancient Egyptian mythology and art, oddities of pop-culture, religion, and anything odd he could find hiding in the woods or in the local library.

In the early 1990s, Justin dropped out of high school and moved to Philadelphia, PA. He spent several years living in various squats while continuing to refine his creative vision, and also recording music and sound with hand held tape recorders.

In 1995, an intense vision revealed, all at once, a vast sweeping story-line upon which a lifetime of artistic labor could be hung. This loosely defined story would also serve as a way of illuminating and amplifying an invisible inner-voice that seemed to be able to modify the world for the betterment of all beings.

In 1997 Justin left Philadelphia to work in the Bering Sea on fishing boats, and spent over one year of his life in total at sea, working 16 hour days and without a days rest for three months at a time. This intense physical and psychological labor also served to deepen the vistas of inner-vision, and seemed to open avenues of communication with disincarnate entities of an undefined nature. During the seasonal lulls in the work, he would return to Philadelphia, where the work of piecing together these visions consumed his days.

Several years later, after many independent visual art and music projects, Justin, together with a friend, founded the CHURCH OF DEVINE ENERGY, an independent religion dedicated to self-awareness through creative expression. The meetings of C.O.D.E. were held in a former gas station, and included many musical performances and below-the-radar art events.

Justin – and his fascination with and research into the mysterious “Toynbee Tiles”, which are embedded in the asphalt of streets across the country – were the subject of a documentary called “Resurrect Dead” which received an award at the 2011 Sundance film festival for best director. The film has gone on to be seen by over a million people across the world.

In 2016 Justin completed researching and compiling a biography and art book of obscure cartoonist/set-designer/sculptor/musician Herbert E. Crowley, a project which he began in the summer of 2010. The resulting book, “The Temple of Silence: Forgotten Works and Worlds of Herbert Crowley” will be published by Philadelphia’s Beehive Books in November 2017. The book’s publishing was financed via crowdfunding, and exceeded its $50,000 goal, raising over $96,000 from 740 backers in one month.

As of 2016, Justin continues to investigate several ‘art mysteries’, pursue visual art at a fevered pitch, and play in at least three Philly-based music ensembles - Northern Liberties, The Invasive Species, and Geb The Great Cackler. An ongoing artwork of interconnecting panels, began in 2000, now unfurls at over 80 ft. in length and averages 5 ft. in height. This work is ongoing.

ReAnimator Coffee is a specialty coffee roaster located in the Kensington neighborhood of Philadelphia. We specialize in seasonally rotating single origin coffees and blends.

Center / Architecture + Design // The Center provides Philadelphia with educational programs, exhibitions, and a public forum to explore architecture, urban planning, and design, allowing visitors the opportunity to understand how these disciplines affect us all in our daily lives. Using our city’s distinctive breadth of architecture, pioneering urban design, and manufacturing heritage as the foundation for conversation, we educate the public through talks, exhibitions, publications, hands-on workshops, design competitions, festivals, and children’s programming.

AIGA’s mission is to advance designing as a professional craft, strategic tool and vital cultural force. AIGA Philadelphia was the first local chapter, established in 1981.