Jorge García Pérez talks about his lifelong commitment to his true passion: the dance. 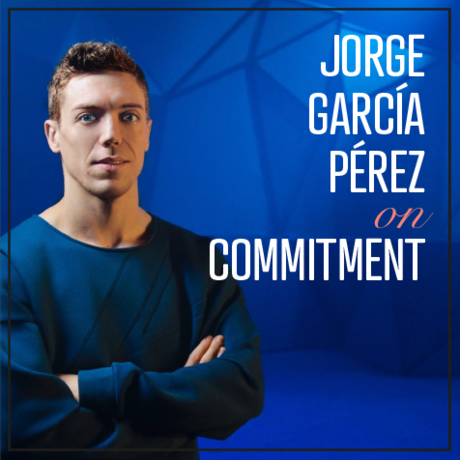 Commitment matters. Because it’s your friend - in good times and in bad.

Commitment is there to motivate and inspire you on days when things come easy. When you’re on a roll, taking huge successful steps towards a promising future. When you look back and see all you’ve accomplished so far.

But commitment will also support you on tough days. When the batteries are low, when you’re uninspired or desperate. When you’re exhausted and you just want to quit. But you keep going regardless. Because you’re committed. One who can definitely tell a tale or two about commitment is our speaker of the month: Jorge García Pérez.

Born 1987 in Zaragoza, Spain, Jorge García dedicated his life to ballet early on. His career began at the prestigious dance school Maria de Avila in Madrid, Spain at the age of nine. At fourteen years of age, he won the International Competition of Zaragoza in the junior category and thus his first international dance competition. Just two years later, he won the same competition in the senior category. After dancing for the Junior Ballet of the Ballet Biarritz II, Jorge García won first place at the international competition “Premio Roma”. As a consequence, he was offered a contract for the Junior Ballet at the Opernhaus Zurich, followed by promotions to “Group with Solo” and later “Solo” with the Zurich Ballet.

Ten years ago, Jorge García moved to Basel and has since been performing numerous leading roles as a Soloist. But his commitment to dance doesn’t stop there: in 2011, Jorge García premiered as a choreographer, for which he got awarded the first prize of the Jugendförderpreis des Sperber-Kollegiums. Fueled by this success, he dedicated more time to building his own repertory, thus winning international choreography prizes in Denmark, Germany and Spain. His ballet pieces were performed in numerous companies throughout Europe and all the way to San Francisco.

In addition to professionally teaching ballet and modern dance in Switzerland, Germany and Spain, Jorge García also founded the Carta Blanca Dance (CBD) together with with Permi Jhooti here in Basel, where he now acts as Artistic Director. CBD combines the worlds dance, music, art, science and technology. Its aim is to bring performing arts to many different spaces in Basel, offering a platform for artists and choreographers to create new work.

Are you out of breath yet? We sure are! Jorge García Pérez, currently aged 31 years, demonstrates a highly remarkable level of commitment throughout his career. We can’t wait to hear him speak - and, who knows, maybe we’ll even get a glimpse of his choreography skills?

Get your ticket now and be ready to be impressed!